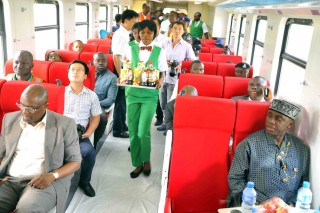 By every indication, Chinese firms are gradually dominating Nigeria’s rail transport sector. On Monday August 29, a $1.85 billion light rail contract was signed between the China Railway Construction Company (CRCC) and the government of Kano State. The Kano light rail will run through four metropolis areas and is expected to be completed in two years. The light rail, running a total length of 73.4 km, will be travelling at a speed of 100 km per hour through these regions.

This development highlights the sustained efforts of the Kano State government in improving the transport system within the state, as well as in driving economic activity. But, it also points to the domination of Chinese firms in the rail transport sector. It is necessary to note that quite a number of Nigeria’s recent rail projects have been the awarded to Chinese firms, underscoring the growing relationship between Nigeria and China.

Earlier, a $1.49 billion Lagos-Ibadan railway contract was awarded to the China Civil Engineering Construction Company (CCECC). This company has received a series of rail contracts in Nigeria, including the Lagos State light rail project. CCECC worked on the first phase of the project (Blue line) connecting Marina to Okokomaiko.

CCECC also opened a Railway Technology Training Centre in Abuja, which is mainly geared towards assisting Nigerians in acquiring the necessary skills in improving rail and mass transit. In April, the Governor of Ogun State, Ibikunle Amosun, signed a Memorandum of Understanding (MoU) with CCECC over a proposed light rail project in the state.

Nigeria’s Minister of Transportation, Rotimi Amaechi, has also said that CCECC will undertake the construction work of two railways connecting Lagos and Kano as well as Lagos and Calabar. Both projects are worth $19.4 billion and will be completed in about three years.

Besides construction firms, the Export-Import Bank of China (EXIM) has been active on the socioeconomic scene. The state-owned bank provided a $500 million concessionary loan to the Federal Government for the execution of the Abuja-Kaduna rail project in the former administration. EXIM is also expected to provide loans for the Lagos-Kano, and the Lagos-Calabar railway projects.

The reason for China’s interest in Nigeria

Nigeria is, and has always been, a big market for foreign investors. But beyond a show of influence, the oriental giant is basically fulfilling the provisions of The Forum on China-Africa Cooperation (FOCAC), which encourages Chinese firms to invest in Africa.