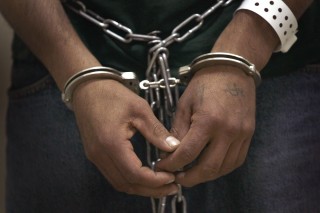 Charles Okah attempted suicide in his court hearing. Is there an end in sight to his trial?

The Nigerian Prison Service (NPS) has dispelled the rumors surrounding the death of Charles Okah, the alleged mastermind of the 2010 independence day Abuja bomb blast that rocked the Federal capital. However Charles did attempt suicide at his court hearing in the Federal High Court on October 6.

Charles, a brother to the leader of the Movement for the Emancipation of the Niger Delta (MEND), Henry Okah, had been arraigned on the charge of suspected plot of the October 1, 2010 Abuja boming and ever since has been incarcerated in the Kuje Prison. His suicide attempt was motivated by what he called his ‘endless trial’.

Perhaps, the endless trial Charles is referring to is not the court trial. Recounting the pain he had endured, he explained in detail the illegal process of his arrest and the undue harsh treatment meted against him in a letter to the Catholic Church from Kuje Prison.

“For two years, we have been locked up in solitary confinement, are not allowed to exercise or get sunlight outside and are forced to sleep on the floor when bunk beds are available,” Charles stated in the letter.

In late 2011, Charles alongside others like Nwabueze, became victims of poisonous gas of fumigation while the suspects were in the room. The Festus Keyamo Chambers (the defense attorney) filed a suit on December 13, 2011 alerting the Comptroller-General of Prisons in Nigeria to address the case to avoid the impending legal implications. This complaint also uncovered that Charles had been deprived of his freedom of worship, and was denied the luxury of seeing his family members when they came on visits. For the Chamber, these treatments were unacceptable since the people in question were merely suspects and not convicts.

Surprisingly, three years later, the Chamber would lodge another complaint. Keyamo had alleged that there was a plot to kill Charles in custody. This was on the grounds that the accused, who was suffering from kidney problems and high blood pressure, was denied the drugs his wife bought for him.

Meanwhile, Charles Okah in his letter to the Catholic Church accused the Federal Government and court of a double standard. The letter pointed out that while Senator Ndume who was suspected to be a Boko Haram financier, was granted bail and freedom to move wherever he liked, Charles and others remained in custody.

In the case of the government, he explained that the administration was quoted to have said there was a list of certain individuals with the Inspector General of Police, who were sponsoring the insurgents and that they were on the ‘watch list.’ “…why did the government not simply have our phone numbers and put us also on its ‘watch list’ while we move about freely?” Charles queried in his letter.

Pre-trial detention and incarceration in Nigeria grossly overlooks the yardsticks encoded in the law. The United Nations International convention on Civil and Political Rights (ICCPR) under Article 14.3 stipulates that, those tried on criminal charges are entitled to a trial without undue delay. This drastically reduces the period of pre-trial detention. The accused may only be detained before trial for suspicious behaviour. However, these standards have been bypassed many times in Nigeria. The case of Charles Okah is just one of several.

Charles Okah ‘s instance which is hardly a pre-trial detention, seems like pre-trial imprisonment. Perhaps, his endless trial could end on October 20, the day his trial is set to be adjourned, or not.