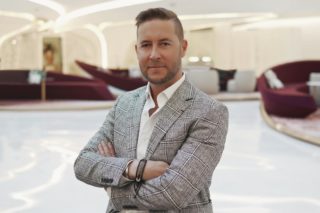 How Jason English inspired the next generation of South African engineers

Sometimes, life is all about being in the right place at the right time. For Jason English, a South African entrepreneur, a serendipitous meeting at an A360 conference would put him on a path to inspire the next generation of South African engineers. By helping a group of school kids recognise their potential and giving them the opportunity to rise to the occasion on a global stage, the story of the South African robotics kids (known as the Springbots) at the 2018 FIRST Robotics Competition is a lesson in what can be achieved when barriers are removed, and confidence is fostered.

In 2018, Jason English was in Los Angeles attending Peter Diamandis’ A360 Summit when a particular speaker caught his attention, the inventor of the Segway, Dean Kamen. As Kamen discussed his FIRST Robotics Competition for youth, English noticed that teams were represented throughout Africa and the rest of the world, but there was no South African group. Speaking to Kamen afterwards, English discovered it was because the South African team couldn’t raise the necessary funding.

“I was horrified,” remembers English, who at the time was the CEO of Prommac, a dominant player in South Africa’s oil and gas services industry. “I believe in education. I believe in engineering. And I just thought, “we have to do something.”

With the help of Kamen, English was put in touch with Roxanne Reddy, and the two of them immediately met to discuss the issue. Reddy explained to English that they had tried to get funding for a South African team, and were only able to raise R2,000 (US $150). In order to supply kits, training, the entry fee and the money to actually get to the competition in Mexico, the team would need more than 150-times that figure.

Prommac pledged to cover the cost of getting the kids to the World Championship in Mexico and also any training. English, then set out to find sponsors to help cover any extra expenses. A job that proved more difficult than expected.

“We were turned down by airlines, broadcasters, and radio stations. I just kept coming up against brick walls. I was totally, totally shocked. In one case, a well-known franchise stated that they only support teams where they have a fair chance of doing well. And so that was my catalyst to say, ‘okay, we’ll just do it,’” English then went to Prommac’s COO at the time, Dany de Barros who seconded and supported the decision. “We just decided we’re going to prove these young kids can do something great, and we’re going to put all of our weight behind them,” remembers English.

With Prommac and Roxanne Reddy, who agreed to be the team manager, on board, English forged ahead, making it his mission to build a South African team that would be given the best opportunity to represent their country on an equal footing. “I didn’t just want to look in the private schools, for me it was more about going into the outlying rural areas and picking out raw inspiration,” English explains. “I wanted this to be a genuine reflection of the true South Africa and I wanted gender diversity so the team was made up of two black females and one black male, one Indian male and a white coach.”

Reddy was integral in helping prepare the kids for the competition. Reaching out to global children robotics groups and inviting them to come and stay with her. “She basically turned her own house into a training centre, and that was it,” says English.

When it was time for the team to head off to Mexico City, Prommac ensured they were outfitted in a South African kit, thanks to some help from AJ Safety Solutions, and ready for the task at hand. For many of the kids, it was the first time they had ever left the country. Passports and visas were needed and by the time they landed, the excitement was teeming. With 192 countries represented, the South African team got to work, quickly advancing to the top 80, then the top 50 and finally making it into the top 10.

The Cinderella-like progression made them the talk of the competition, garnering support wherever they went and even resulted in a personal message from the South African rugby team (The Springboks) wishing them luck for the finals after breaking the world record for the highest score in one of the quarter-final rounds.

“The kids were nice and friendly to everyone, but beyond that, they just did an amazing job. They worked so hard and everyone knew their story of almost not being able to get there and being left out. It made people want to root for them,” English explains.

During the semi-finals, the machine of the team South Africa was paired up with suffered an unfortunate breakdown, leaving the Springbots to finish in sixth place. But their accomplishments hadn’t gone unnoticed. Walt Disney, a major sponsor of the FIRST Robotic Competition, had been keeping an eye on the South Africans, awarding them a gold medal at the end of the contest in recognition of their incredible journey.

“Walking out with the team holding the South African flag and receiving gold medals in the packed 20000-seater CIUDAD DE Mexico arena is a memory I’ll never forget. It brought me to tears knowing that our contribution had literally proved that with the right support, encouragement and backing, anything is possible,” remembers Jason English.

And this is now the philosophy behind the CG Tech group who have gone on since to sponsor other athletes (one who achieved silver in the World Bounce Championships and another who won the Belgium knock-out golf championship).

As English has progressed to Chief Ecosystem Officer of Prommac’s holding company CG Tech, promoted CEO Dany de Barros continues to sponsor the South African team, believing education is the first step in powering the future. “When Jason brought this to us, it just automatically ticked all the boxes. It’s education, but it’s also about changing the opportunities of children. Giving them the exposure and experience needed to succeed now, and in the future,” says de Barros.

For English, the parallels between the story of the Springbots and that of Prommac played a huge role in his eagerness to get involved. “At the most basic level it’s a story of the underdog,” remarks English. “I think at times Prommac felt like the underdog, but we learned that our story and our team were the most important tool we had in achieving success.”

“FIRST Robotics is about empowering the next generation of engineers by encouraging teamwork and collaboration. These kids don’t care about politics or cultural differences. The competition is used in a way that promotes discovery and breaks down boundaries. These are the minds that are going to transform the future. It doesn’t get much better than that.”