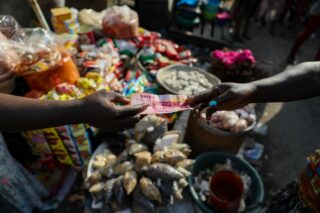 Ghana, struggling with rising prices for food, transportation, and other needs, is hopeful that a recent hike in the cost of borrowing will end eleven months of growing inflation.

After an emergency meeting last week, the Bank of Ghana increased its benchmark interest rate by 300 basis points from 19 per cent to 22 per cent. It is not the first time Ghana’s interest rate is exceeding that mark— it was at 26 per cent for 11 months until November 2016. However, the three per cent increase this time is the bank’s highest rate jump since it received the independence to set interest rates in 2002. This bigger-than-expected hike adds to the 550 basis points of increases since November. Ghana has raised interest rates by 750 basis points this year.

Ghana’s inflation is too high for investors

The backdrop for the increase is a July inflation rate of 31.7 per cent, the highest since 2003. Ghana’s central bank wants inflation to be around 6 to 10 per cent, but recent events, particularly in the months following the pandemic, have made that a pipe dream. Rising costs have been fueled by surging international commodity prices and the sharp depreciation in the cedi. Rising food prices have also contributed to Ghana’s inflation this year, with food inflation surging to 32.3 per cent in July.

Last month, the central bank kept its key rate unchanged after Governor Ernest Addison said there were signs that rampant inflation was slowing. Water and electricity rates, however, were expected to rise 22 per cent and 27 per cent, respectively, beginning next month. In July, producer prices rose 41 per cent, the fastest rate in eight years, contributing to a worsening inflation outlook.

The market is not reacting kindly. The yield on Ghanaian dollar bonds maturing in 2032 increased for the fifth consecutive day on Thursday, reaching 21.24 per cent. According to JPMorgan Chase & Co. indexes, the premium investors’ demand over US Treasuries to hold Ghana’s debt currently stands at around 1,880 basis points. That effectively locks the world’s second-largest cocoa producer out of the Eurobond market.

That’s not the only worry for investors. In addition to raising interest rates, the Bank of Ghana will gradually increase banks’ primary reserve requirements. The bank also hopes to persuade mining and oil companies to sell foreign exchange to it, thereby increasing the frequency of its forex auctions and strengthening the cedi. The currency has dropped 36 per cent this year, making it the world’s second-worst performer after the Sri Lankan rupee. The apex bank plans “work collaboratively” with mining and international oil companies to buy all foreign exchange generated by their voluntary repatriation of export proceeds.

Ghana is struggling to keep up

Worse still, Ghana is not earning enough money to give the economy a fighting chance. “The execution of the budget for the year has remained challenging,” the Bank of Ghana said in a statement (pdf) after its latest rates increase. “Revenue has not kept pace with projections and this has created financing challenges. In the absence of access to the international capital market and given the constrained domestic financing, central bank overdraft has helped to close the financing gap as reflected in the mid-year budget review.”

Ghana requested a credit facility from the IMF in July in order to help anchor price stability and fund its economic program. Now that it doesn’t have access to the market, and domestic funding is “constrained,” the government has turned to its central bank for support.