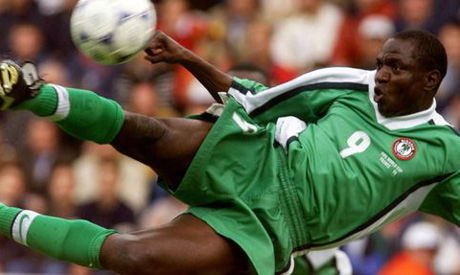 The Eulogies continue to come from every corner of the world.  The tributes on Twitter, Facebook and of course Blackberry Messenger haven’t stopped as Rashidi Yekini- a true Nigerian and indeed African legend, finally bid goodbye to all on Saturday the 5th of May 2012.

What else can I say about the Superstar footballer that has not been said?  How else do I express my grief that a man who gave Nigeria so much joy in his playing career, was somehow, not adored in his last days on earth by the same country he gave his all?

Quite a number of his former teammates, football administrators, as well as soccer fans have had one nice thing or the other to say about this legend since Friday. But like my friend and colleague, Bolade Aduratomi, quipped on his Blackberry status: if we refuse to celebrate our heroes while they are alive, we shouldn’t’ think our crocodile tears  (when they die) will fool anyone.

Well, this piece isn’t about what we all should have done or not. I just want to use this medium to express my own gratitude to Rashidi for all the fond memories he gave me while growing up; all the goose bumps his thunderous strikes brought out on my skin; all the joy he filled my heart with those tap ins whenever the Super Eagles needed a goal from somewhere… this list is just endless.

It is quite understandable if you really do not have a first hand experience of the legendary status of this great Nigerian striker. Thanks to Youtube anyway, at least generations yet unborn can still catch a glimpse of what made Rashidi Yekini the legend that he is.

How can I forget his 2 belters against Congo DR (then known as Zaire) in the quarter-finals of the 1994 African Cup of Nations? Or the way he calmly tapped in Finidi George’s cross to make it 2:2 in that 1994 epic semi final clash with Ivory Coast? How do I begin to describe how as a 12 year old I was jumping for joy throwing my crutches in the air when he rounded Cameroun’s goalkeeper to score the winner in the 3rd place match of the 1992 Nations Cup?

The truth is, unlike today’s Super Eagles players, Rashidi was an excellent example of professionalism. He always went about his duties of scoring goals and rescuing the Nigerian national team even when the going was tough in several games. As his former team-mate Sunday Oliseh said in an interview with the BBC,  “he was the reason we were able to achieve the results we did- because of all the important goals he scored.”

“Today I don’t think we have a striker who comes even a mile close to how good he was as a striker,” said the former Super Eagles captain. Well, as the greatest goal scorer Nigeria ever have (his 37 goals in 57 games is still a record) bid us his final farewell today, here are my five unforgettable moments about Rashidi Yekini:

The 1992/93 season was one to remember for Yekini as he bagged an outstanding 34 goals in 32 games for his modest Portuguese side Vitoria de Setubal. Yekini finished as the top league scorer that year, which ultimately led to him being crowned the 1993 African Footballer of the Year. Indeed, Rashidi was the first Nigerian to get the coveted crown- opening the way for such stars as Emmanuel Amuneke, Kanu Nwankwo and Victor Ikpeba to win the award in subsequent years.

At the 1994 African Cup of Nations, the Super Eagles faced a tough battle against the Leopards of Congo DR (then known as Zaire).  It was billed as one of the toughest games Nigeria would face at the tournament. The Super Eagles faced the same opponents two years earlier in Sengeal ‘92 at the same stage of the competition with Nigeria only managing a hard fought 1: 0 win. But when the chips were down, up stepped Yekini with two goals (one from the spot) to ease our passage to the last four of the tournament.

3 ROUNDING OFF IN STYLE

At the 1992 Africa Cup of Nations, Nigeria was one of the favourites to win the competition. Unfortunately, the Super Eagles lost to their eternal rivals, Ghana’s Black Stars in the semi finals. It was a sad day here in the country. So when the team faced Cameroun in the 3rd place match, all Nigerian fans wanted was at least the bronze medal to ease their pain. With the game tied at 1:1, there again was Yekini who raced onto an Etim Esin through ball, rounded the Cameroonian goalkeeper and scored the winner. Pure bliss!

The best game ever to be played in an Africa Cup of Nations was the 1994 semi finals between Nigeria and Ivory Coast. The Elephants scored first and Nigeria’s Ben Iroha equalized. Yet again, Ivory Coast went ahead but Rashidi Yekini was again on hand to tap in a Finidi George’s cross to level scores. But after 120 minutes and no other goal, the game went to penalties. Up stepped Rashidi with the last spot kick. His thunderous strike gave the Ivorian goalkeeper Alain Guamane no chance at all with the Super Eagles winning the epic clash by 4:2.

1 DANCING WITH THE NET

Of course it just had to be this one.  Nigeria was playing Bulgaria in her first ever game at the USA 1994World Cup. A World Cup participation made possible thanks to important goals from Yekini in the qualifiers. But the goal legend saved his most important for the competition proper. Rashidi tapped in Finidi’s cross to score the country’s first ever goal in the competition. And in sheer ecstasy, Yekini grabbed the net, raising his hands up and screaming for joy. That sight was one of the best highlights of the 1994 World Cup and will forever live in my memory.

Wow! I could go on and on and on to talk about this great man who has been a blessing to Nigerian football. But I guess it just wouldn’t bring him back. All I can say now is: thank you Rashidi Yekini for everything, you will forever remain in my heart. Rest in peace!