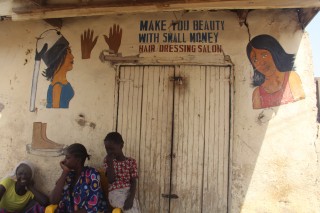 Beyond the bombs: The fate of small businesses in the birthplace of Boko Haram

Bamodu Abubakar dreams of sitting in his rocking chair at sunset, surrounded by his two wives and eleven children, responding to greetings from members of his community as they pass by his house. But today, when the sun sets, he will pack up from another busy day as one of three tailors in an IDP settlement in Bama, a former hospital turned camp, which houses an estimated 32,000 Internally Displaced People (IDP) in one of the biggest towns in Borno state.

Abubakar’s present reality is a result of Boko Haram’s seven-year insurgency, which has rocked the North East region since 2009, destroying over $5.9 billion worth of property, while displacing more than an estimated 2.2 million of its people and leaving over 20,000 people dead.

Many of those in the camp patronise the tailoring services of the oft-smiling senior citizen, who became a refugee after a 2014 attack in his hometown Gwoza by Boko Haram. There are soldiers patching their camouflage kits, children seeking to thread their shirts, fathers in need of realignment for their overused kaftans, and mothers amending clothing for their entire households. The rest of Abubakar’s family are in a different camp within Borno, but he works to support the widow he married in camp and his eight-year-old stepson with the pittance he earns daily. 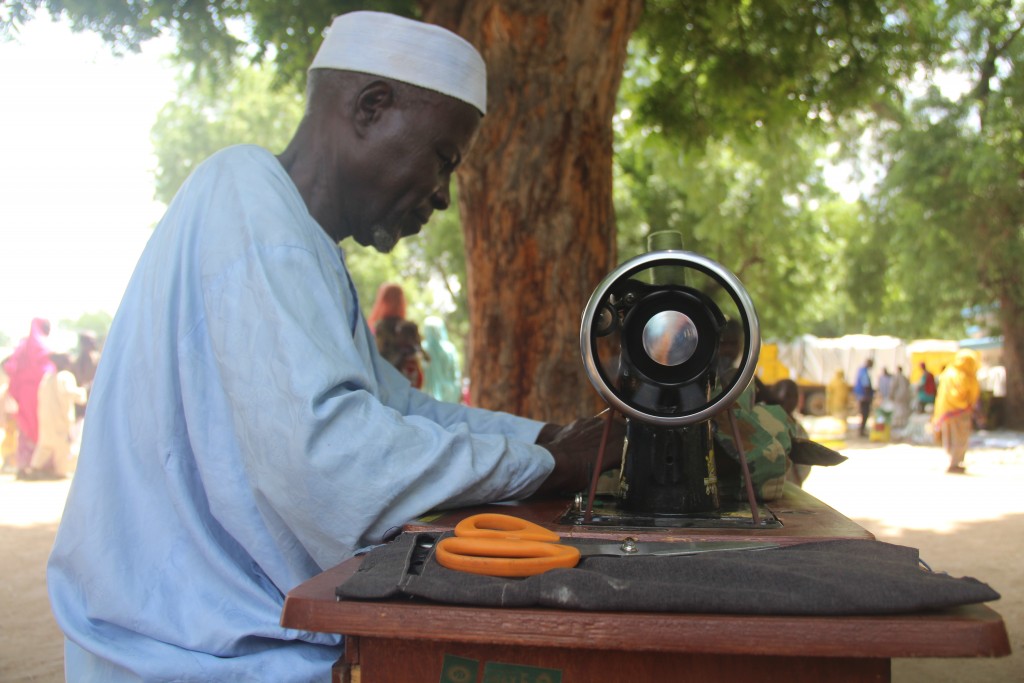 “I make two or three hundred naira every day,” Abubakar laments. “Many of the people here do not have money to pay me so I do a lot of free work but it keeps me very busy.”

Business has been challenging for him, other IDPs, and practically everyone across the region. In Maiduguri and other parts of Borno state, similar tales of frustration are legion.

Before the war, Maiduguri was a commercial nerve, acting as a route for hats from Bama, fish from Baga and a host of agricultural produce (including beans, onions, sesame seeds) going to Cameroun, Chad, Niger and sometimes even as far as Libya. In 2010, Borno together with Adamawa and Yobe, other states at the nexus of the crisis, posted over 12 million naira cumulatively as Internally Generated Revenue (IGR) according to data from the National Bureau of Statistics; it shrunk to about 10 million naira in 2015. Borno, with over 6.9 million hectares of arable land, was the country’s third largest employer in the agricultural sector but according to the National Emergency Management Agency (NEMA), over 17,000 farmers have left the state and the rest of North East Nigeria, to the South of the country.

Now, traders and fishermen have to queue from as early as 6am to join a convoy of more than a hundred vehicles at a time, with military escorts ahead. The journey begins at about 10am and those who cannot meet up with the return company around noon have to sleep over and try again the next day turning two-hour journeys into a two-day expedition.

In the early days of the insurgency, Katembi Bulama would sell a full Bedford truck of firewood for 35,000 naira. These days, the price has increased to 48,000 naira as profits diminish while both army and police collect bribes to allow people to pass through certain routes. “We can’t go into the bush again to get firewood, all we do now is buy from those people who cut down the trees in their compounds,” the 35-year old says. “Business is not as sweet as before. We are just doing this to earn a living rather than just staying idle.” 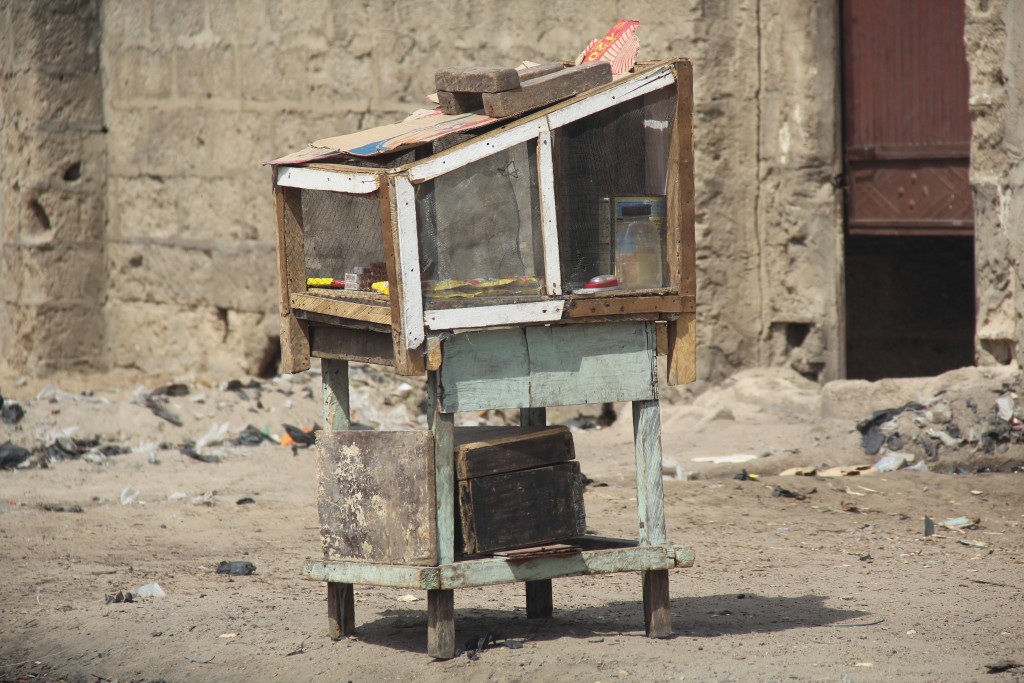 The Maiduguri airport reopened earlier this year after a two-year hiatus; telco services were suspended for an eight-month period in 2013 as well. Houses in Pompomari, a predominantly Igbo area, remain largely deserted after the residents abandoned their shops in the Gamboru market when those of their kinsmen in the nearby Budum market were torched. The bars and beer parlours they used to frequent are still half-empty.

But Bala Geidam, one of the most popular realtors in the city, says business has been booming regardless since the crisis. “At the peak of the insurgency crisis in 2013 and 2014, we had so much business coming in that we had no time to eat,” he shares in his office on the popular Damboa Road.

“People were selling their houses so much; some would come and drop their keys here in this office,” the 41-year-old says, tapping his table. “We would sell from here and transfer the money to them. I even sold one duplex worth 15 million naira in Pompomari for just 3.5 million naira because the owner was desperate.”

During the crisis, he, his partner and their seven employees abandoned the office out of fear for their lives. They took calls from opposite the building or worked from the safety of their houses, acting as laiasons for other residents of Maiduguri, especially those in the troubled areas.

Late in 2014 and early the next year, the military began a renewed onslaught against Boko Haram, in conjunction with the Civilian Joint Task Force (cJTF), the local vigilante group. In May 2015, during the inauguration of Muhammadu Buhari who had vowed to defeat Boko Haram in the run-up to the presidential elections, the new commander-in-chief announced the relocation of the command centre headquarters of the Nigerian army to Maiduguri. Unsurprisingly, the peace is returning and with it, a gradual resurgence of many businesses.

At the Bola market – the Igbos are back, haggling noisily over auto spare parts and replacements with customers who are too happy to see them to even complain. Other hubs within the city including Monday Market and the Post Office area where computer centre operators aggregate, have also seen an influx of returnee traders originally from Southern Nigeria – the memory of bombs previously exploding in both places now all but forgotten.

Aid workers and foreign journalists continue to troop into town, which is driving the prices of hotel rooms – which are barely available without as much as a two-week notice – and apartment rent up. Business is booming again in the real estate sector, Geidam.

Bars and restaurants are opening their doors while visitors to nightclubs have found a way around the 10pm curfew – go early and return home just before that time limit or pull an all-nighter and sleep within the club premises. Recently Afrobeats star, Mr Eazi was in Maiduguri to donate relief materials to IDPs and experience the night scene – the first visit by any celebrity since that of P-Square circa 2007 for a concert, save for Bono’s a few months ago.

“The only problem we have now in this Maiduguri is the curfew”, says 32-year old Sunday Yuguda known among party-goers in the city as DJ X-Mix. “I still play from 10pm on Wednesdays and Fridays till 2am or even 3am. Before Boko Haram, Maiduguri was a happening place. It was so social that you could wake up at 2am, leave your house and find an open bar at that time. But now the number of people coming to club has reduced because nobody wants embarrassment from the security at checkpoints.”

A student at the city’s Ramat Polytechnic at the turn of the millennium, he and his friends would head to the Lake Chad Club to party. During the insurgency, the curfew sent the club into a semi-comatose state and Yuguda soon moved on, like many of its elite patrons.

For the younger patrons, they soon found Hot Bites, a new spot on an adjoining street. There, the religious tolerance of this predominantly Islamic community is in full view: urged on by pop music from Tekno, Wizkid, and Mr. Eazi, young Christian men of Igbo origins dance hand in hand with young Kanuri and Shuwa ladies whose Muslim parents would shudder at the sight. Outside in the backyard, sex workers in jabs and long skirts negotiate with would-be patrons for as low as N1500 for overnight sessions.

But with the Nigeria’s economy sliding into recession, small businesses across Maiduguri are doing all they can to avoid going under; more teenagers are becoming breadwinners to save their families from languishing in the throes of poverty, getting into unskilled labour as farm hands, laundrymen or even as sex workers and security personnel. For those who can’t adapt or keep going, the shops stay closed while their owners attempt to raise capital. 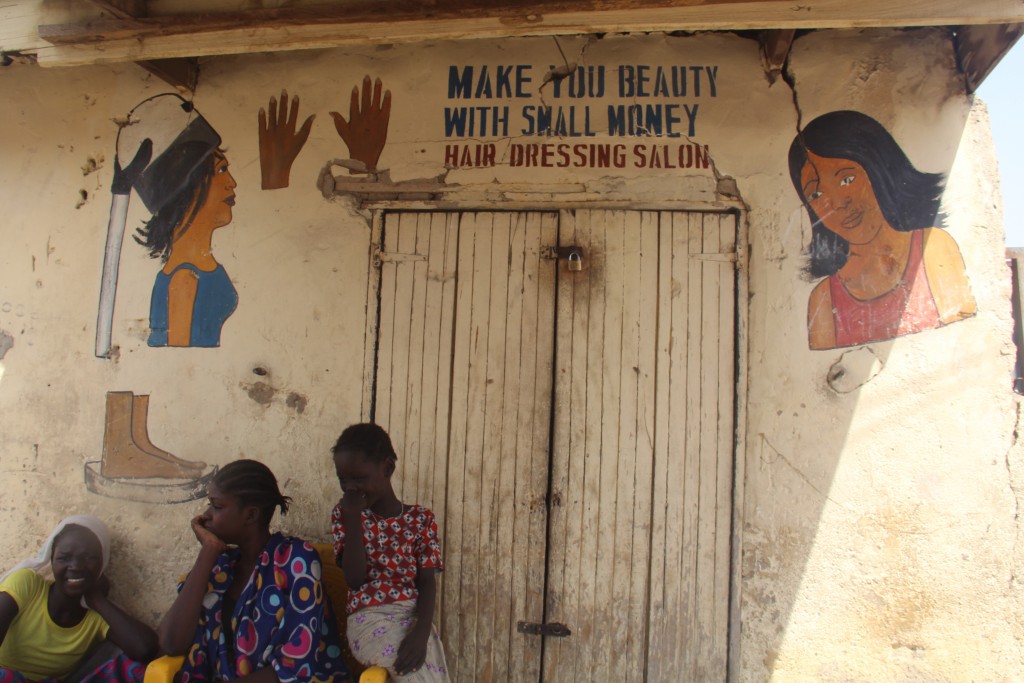 Soldiers and civilians alike head to buy barbecued fish and potato chips from Rifkatu, one of the many sellers along the entire stretch of Circular Road, a popular street within the metropolis. The 35-year old mother of three relocated from Michika in the neighbouring Adamawa state 17 years ago and has sold fish at the same spot since 2008.

At the peak of the insurgency in 2013, she was selling 80-100 pieces daily to military and paramilitary agencies as well as fellow city residents who had run out of food supplies. “People in this side of town were coming to buy fish once their food finished because of all those people from Pompomari area where Shekau’s men were throwing bombs who were coming to squat with them.”

“These days, I sell like only 40 fish a day because there is no money in the economy again. We start to sell from 2 o’clock in the afternoon and all of us even the suya sellers start packing by 9 o’clock.”

On the other side of the curb, unaccompanied children – who in all likelihood are strays from nearby communities for Internally Displaced People (IDPs) trudge by, begging for spare change.

The road to self-sufficiency

At various discreet locations across the state, NGOs are putting in hours to ensure that other IDPs are kept away from the streets but instead empowered economically to be self-sufficient. Action Against Hunger (ACF International) is one of them.

In 2014, an attack by Boko Haram in her hometown of Madagali in Adamawa state, 32-year old Maureen Stephen lost her source of livelihood, her home and her husband of over one decade. Starting last summer, Maureen and 5,984 other Internally Displaced People (IDPs) began to receive N17,000 monthly – equal to approximately 50% of their basic living costs – from the ACF under a $4.6m initiative funded by the USAID’s Food for Peace Programme.

When the programme ended last August, she was already self-sufficient, trading in tarwada (dried catfish) bought from the Baga market within Maiduguri to her neighbours and fellow IDPs outside the camps, in Bulukutu, the suburb of town where she lives. ACF is building on success stories like this to help others like her, stand on their feet. “As long as the communities host IDPs and IDPs remain displaced away from their homesteads, this support will continue, as families might not be able to make a living”, says Thierry Laurent-Badin, its director of programmes in Nigeria.

The Borno state government has begun relocating some of the fellow IDPs to their various communities and construction work is ongoing in some of these towns but the people remain wary of being uprooted again. There have been occasional reports of farmers, suspecting that landmines were still buried within their farmlands, sent cattle to graze in them and watched the bloody explosions in tragic awe.

So some like Abubakar who continues to stitch and mend back in the Bama camp thanks to a new machine donated by NEMA, have stayed back. It’s a hard knock life – losing everything and yet unsure of a life beyond those gates.