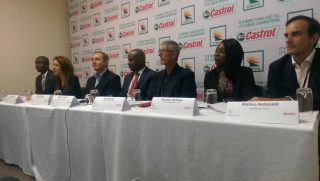 Eterna Plc. has officially launched Castrol Oil into the Nigerian market. This follows the company’s 2015 distribution agreement with Castrol. It is also worthy to note that Eterna was granted the license to blend and distribute Castrol Automobile and Industrial lubricants at its Sagamu, Ogun state facility.

Some of the Castrol products launched into the market include Castrol Edge- fully synthetic oil with fluid strength technology. Castrol Magnatec- semi-synthetic oil instant protection from the start and Castrol GTX Essential-trusted protection for your engine.

“I am proud to announce that the latest addition to the Castrol GTX family “Castrol GTX Essential” was produced for the first time in the world at our plant in Sagamu this August. This is a clear demonstration of the confidence reposed in our manufacturing capabilities by Castrol,” said Mahmud Tukur, Managing Director of Eterna PLC.

According to Mahmud Tukur, the journey began as far back as 1991 through the vision of the company’s founder, Otunba Tunji Lawal Solarin, when Eterna started importing and distributing Castrol Lubricants in Nigeria. A robust marketing structure was set up and with increased market sales, Eterna began to manufacture lubricants locally through a third-party facility on an interim basis.

The aim was always for the company to own its blending facility and this dream became a reality when Eterna secured a US $940,000 loan from the International Finance Corporation (IFC) in 1995 to construct what was to eventually become one of the best and most modern lubricant manufacturing plants in Africa. Castrol designed the plant and provided the required technical support during construction ensuring that the plant met global standards.

Twenty years later, Eterna’s 15,000MT capacity state-of-the-art lubricant manufacturing plant, which is fully owned by its subsidiary, Eterna Industries Limited, is one of the only three Castrol accredited blending plants in Africa. The plant is located in Sagamu, Ogun state on a sprawling 5 hectares of Prime Industrial Real Estate.

The plant is equipped with a state of the art laboratory, which supports the blending activities as well as used oil analysis services for customers. This is vital technical support, which is made available for customers to enable them to optimize equipment uptime and avoid failures where possible, through early detection and diagnosis. The lab frequently participates in ILCP (Inter-Laboratory Correlation Programmes) exercises where it is provided with random samples to test and the results are benchmarked against many laboratories scattered all over the globe.

What you didn’t know about Castrol

Charles Wakefield founded Castrol in 1899 under the name of ‘CC Wakefield & Company’ when he was 39.

Early in the 1900s Wakefield took an interest in two new motorised contraptions – the automobile and the aeroplane. The engines required lubricants that were runny enough to work from cold at start-up and thick enough to keep working at very high temperatures. Wakefield researchers found that adding a measure of castor oil did the trick nicely. They called the new product “Castrol.”

Castrol has gone on to pioneer lubricants for the automotive sector, aviation, industrial, marine and even NASA. A Castrol industrial grease played a central role in the smooth operation of NASA’s Curiosity rover. The grease is formulated for the space program to perform in temperatures ranging from minus 80 degrees Celsius to 204 degrees Celsius.

The first place Castrol appeared on the African continent was in South Africa, where a small amount of Wakefield products were sold by agents since 1915. Durban, Johannesburg and Cape Town branches were opened in 1929. Castrol now operates in almost all African countries, with recent market expansions into Kenya, Ghana, Ethiopia and now Nigeria.

The success of the company owes much to the original philosophy of Charles Wakefield. He drew on the help and encouragement of his customers in developing his new Castrol Oils, because he had the foresight to see that working in partnership was the best way to achieve success for both parties. This rationale is as relevant to Castrol today as it was then.