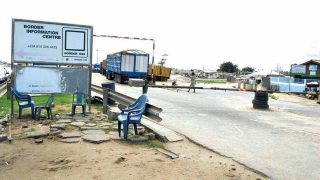 Following the outcry of west African countries over the indefinite closure of land borders in Nigeria since 2019, the Economic Community of West Africa States-ECOWAS on February 9th, 2020, inaugurated a committee  “to study and make a full report on Nigeria’s land border closure with its neighbour.

The committee will also investigate the impact of closed land port of entries for goods and commodities across the country.

The Nigerian foreign minister, Geoffrey Onyeama, said the report will be ready “as soon as possible,” however there is no official deadline.

Nigeria stopped the movement of products and commodities within its borders mainly due to smuggling activities that affect the trading and security of the country.

Its neighbouring countries: Benin, Cameroon, and Niger have complained about the serious decline in trade activities due to the border closure, as they depend largely on the African giant’s economy, population, and commodities.

However, the Nigerian government cited noncompliance from neighbouring countries to the ‘’established protocol for transiting of goods” in the ECOWAS Trade Liberalisation Scheme (ETLS) as one of the reasons for the closure. The government believes their(neighbours) feeble enforcement of trade policies and laws permits smuggling of drugs, weapons and other contrabands into its territory.

‘’We must compel our neighbours to agree to sign the documents that will enable us to execute the exact letter of the protocol on the transit of goods’’ said Hameed Ali, the Comptroller-General of Nigeria Customs Service.

Nigeria remains rigid about the issues surrounding the infinite closure of land border as the country expects it’s West African brothers to address all complaints before welcoming land trade again. Hammed Ali cited an example using Niger republic –  he said ‘’Niger has agreed that no more exportation of rice in any form to Nigeria, this is the type of thing we are looking forward to. unless we get to that level, the borders will remain closed’’.

In the nearest future, Nigeria has the potential to trade significantly with the 53 African countries due to the African continental free trade agreement in 2019. To prepare ahead for this big market, the current strict approach to mitigate smuggling activities may largely favour Nigeria, as it sets the boundaries on what is acceptable to its neighbours in terms of goods and commodities.