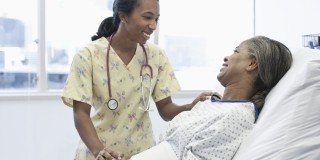 Caring for the aged: Why are homes for the elderly still ‘taboo’ in Nigeria?

Recently, in Calabar, Cross Rivers State, 13 elderly persons were picked up from the street after being thrown out by their respective families. Allegedly the families claimed that the elderly persons were witches. They were subsequently taken in by Pope John Paul II Good Samaritan Home. In response to this incident, Reverend Sister Yvonne Nwankwo, a sister-in-charge of the home, urged children to stop maltreating their aged parents, using the recent development and other instances where aged citisens have become victims of neglect.

In Nigeria, there are only a handful of assisted living facilities (such as Rossetti Care), and about 13 nursing homes established strictly to provide care for retired citizens. Nigeria has the largest number of elderly people South of the Sahara, over the age of 60 years.

Assisted living facilities are few in number because typically Nigerians do not find it culturally acceptable to place their parents or grandparents under ‘external’ care. Doing so is perceived as irresponsible and even inhumane, as the presence of elderly people is usually revered as a symbol of wisdom, as well as a blessing in Nigerian families. This view makes it nearly impossible for such homes to thrive presently.

In addition, many are skeptical of nursing homes for the elderly, with instances regarding abuse, disregard, and gross negligence. Thus, in order to avoid such unpleasant situations, Nigerians prefer to have their elderly ones close to them. This preference is also shared by those who wish to live out their last days in an environment that they are familiar with.

Despite this reservation shared by most Nigerians, abuse of old people in Nigeria is not restricted to caregivers in homes and other similar institutions. Albeit generally unreported, the elderly can also be neglected by their families. The negligence is also partly due to the inability for most families to continue to sufficiently cater to their elderly ones.

Pope John Paul II Good Samaritan Home is not the first to rescue old and ailing citizens from streets in Nigeria. However, even these philanthropic homes are sometimes inadequately equipped to care for these senior citizens due to lack of funding. They usually require the support (mostly financial) of the elderly citizens’ children or relatives. The inability for both these organisations and family members to care for these citizens is evident in the number of elderly people who beg in virtually every part of the country.

In developing nations in Asia, such as Nepal and India, similar views are adopted. However, their governments are implementing policies to tackle the issues that surround care for old people. Particularly those without children.

Aging causes people to be less active, frail, and exposed to more risks of contracting a disease. The United Nations recognised this fact at the United Nations General Assembly in Vienna, in 1982. This assembly then adopted a set of principles for order persons, and Member States incorporated them in their programmes for the old.

Despite the above, and the provisions made in the 1999 Constitution, in Nigeria, the burden of care squarely rests on family members. Section 14. 2(b) of the constitution states that, “The security and welfare of its people shall be the primary purpose of the government”, and it goes on to promise in Section 16, sub-section 2(d), “That suitable and adequate shelter and suitable and adequate food, reasonable national minimum living wage, old age care and pensions and unemployment, sick benefits and welfare of the disabled are provided for all citizens.” Unfortunately, the government seems to have reneged on these promises as most elderly are not covered by any social security scheme.

For more insight on caring for the aged, listen to the podcast below