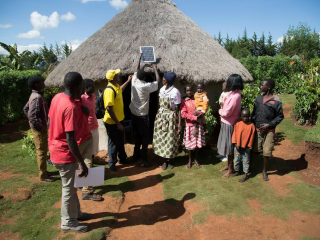 Azuri Technologies raises €160,000 in its first ever crowdfunding project in Kenya

In 2015, the total crowdfunding market in Africa was estimated at $32.3 million, $17.7 million of that was directed at startups and SMEs. According to the Afrikstart report of 2016, these Africa-based platforms launched 4,939 crowdfunding campaigns, with an average success rate of 67 percent. The World Bank estimates that the crowdfunding market will be as large as $2.5 billion by 2025.

This 17 million KES is a debt finance that will enable Azuri’s partner, Raj Ushanga House, deploy 1,200 Azuri Solar Home Systems to about 6,000 people in Kenya.

Raju Haria, CEO of Raj Ushanga House, said, “Since our partnership with Azuri began a couple of years ago we have been able to directly finance products providing clean energy to off-grid households in Kenya. With our proven model, we are excited to bring in external debt providers such as TRINE to really scale up our customer base for basic energy products as well as appliances such as PayGo Solar TV.”

The growing crowdfunding market is becoming an important means of funding new technology in rural Africa–the often neglected demographic of the continent. Rural Africa constitutes two-thirds of the continent’s population and remains the least attended to in terms of technological innovation. But if the continent is to continue growing, this section of the population must be carried along.

In contrast to microfinance where large investors make many small loans, crowdfunding allows many small lenders to provide substantial finance to organisations with the reach and scale to deliver significant impact. The for-profit nature of TRINE means that its projects are economically viable as well as delivering a long-term social and environmental benefit.

According to Simon Bransfield-Garth, CEO of Azuri, “Crowdfunding is clearly no longer just for startups and has the potential to provide a new class of capital for energy access.”

This crowdfunding project is TRINE’s first “A” level risk rating to date and is one of the fastest to reach its original fundraising target. Azuri says plans are already underway for further campaigns.