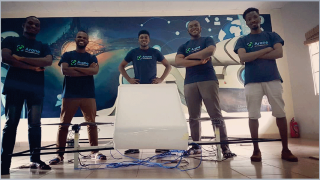 Arone – The startup revolutionising delivery via drones in Nigeria

Emmanuel Ezenwere is the founder of Arone, a Nigerian startup that is changing the personalised drone delivery system in Nigeria, particularly in the area of healthcare. Ezenwere conceived the idea for Arone once he visited Lagos and met Temie Giwa-Tubosun, the founder of Life Bank, a startup working to improve access to blood transfusions in the country. “I started thinking about the impact it would have if we were able to assist them by using drones to deliver blood much quicker to people that need it so desperately. So that was when the idea came,” he told This Is Africa(TIA).

Daily, hundreds of people, particularly women and children, die avoidable deaths due to a lack of access or untimely access to medical supplies. Approximately 1.6 million Africans die of diseases that can be prevented or treated with timely access to appropriate and affordable medicines, vaccines and other health services. Subsaharan Africa which accounts for over 50 percent of these deaths also has the lowest blood donation rates and poor accessibility to even the least available medical care.

Using a smart aerial logistics technology empowered with artificial intelligence and renewable sources of energy, Arone is bridging the gap between rural and urban health care centres by setting up drone delivery stations at blood banks and medical supplies distribution centres to provide a faster delivery of vital medical products to neighbouring rural and urban clinics on demand.

Arone’s team is made of six individuals with backgrounds in different tech fields including engineering, software development and design, all brought together by Ezenwere. According to him, he’d worked with them on previous projects hence when he conceived the idea for Arone, he reached out to them and they were just as excited as he was.

Regarding funding, Arone received about $5000 in March from three angel investors at the Roar Nigeria incubator at the University of Nigeria, Nsukka, where it’s currently incubating. According to TIA, a large percentage of that funding has been invested in obtaining the inventory and equipment for building drones, including a 3D printer for rapid prototyping.

Last month, Arone was selected to participate at the 38th GITEX Technology Week in Dubai, the biggest tech-startup event in MENA and South Asia with over 850 startups from 75 countries. Before that, the budding startup emerged the winner at the Slush Global Impact Accelerator (GIA) regional programme at the Heartland Incubation Hub in Owerri, Nigeria and will be representing Nigeria at the GIA finals in Finland, in December.

The goal for the startup is to take this impact technology to countries across Africa,  We plan to expand beyond Nigeria to countries such as Congo, Rwanda and beyond. So we expect to make a large number of life-saving deliveries each day. We really want to reduce the number of deaths caused by a lack of timely access to adequate medical supplies. We believe we can get it down to zero,” Ezenwere said.

Recently, the use of drones has become a global phenomenon in healthcare with the likes of American robotics company, Zipline, launching operations in Tanzania and Rwanda in the last two years. Dubbed “the Uber for blood” the company has recorded remarkable success delivering over 5,500 units of blood over the past year, often in life-saving situations.