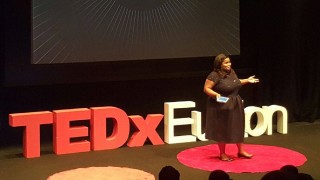 #Vision To Reality: 6 inspiring quotes from the 2015 TEDxEuston conference

The recently concluded 7th edition of the TEDxEuston conference was a vision turned reality. The programme hosted some of Africa’s foremost media personnel’s, politicians, and entrepreneurs, who shared inspiring thoughts and ideas on shaping the African continent. This year’s conference themed “Vision To Reality” held on Saturday 5th December at the Mermaid Conference Centre, Blackfriars, London, 2015.

Here are a few inspiring quotes from some of the speakers.

The award winning journalist, activist and public speaker, Mona Eltahawy, shared stories from her book titled ‘Headscarves and Hymens: Why the Middle East Needs a Sexual Revolution’. Eltahawy has been openly defiant on Muslim issues and feminism in the Middle East.

In an interview a few months ago, she said, “Do not be chaste self, rebellious, do not obey orders, and know that you deserve freedom.” Eltahawy doesn’t wear a scarf – hijab, according to her, the hijab does nothing to protect women, or change the way they are been treated.

In her book, she writes, [I was] traumatized into feminism — there’s no other way to describe it — because to be a female in Saudi Arabia is to be the walking embodiment of sin.” At the conference, she spoke of breaking the barriers of fear against the state, something she calls “the trajectory of misogyny.” Eltahawy calls on Muslim, and Arab women to lead and maintain the conversation around feminism, sexism, in regards to the religions burden placed on them with the idea of modesty.

“There is nothing uniquely African about corruption.”

The Liberian academic, activist and author couldn’t have been more apt. It’s amazing how most people, even Africans, equate corruption with Africa. For them, Africa is a synonym for corruption. But this is flawed thinking, corruption exists everywhere, even in developed countries. As a matter of fact, corruption is as bad in the US as in developing countries.

Pailey added that “Corruption is a function of both greed and poverty…” Robtel is the author of Gbagba, an anti-corruption children’s book published two years ago to critical acclaim. She was also on the list of ’25 Africans to Watch’ by the Financial Times in 2015.

“We need to begin a dialogue between ourselves … It’s time we start writing a new narrative that doesn’t focus on the struggle, but on progression.”

Nancy Kaangira is best known for spurring conversations around entrepreneurship and leadership in Africa, most notably on her weekly television show “Power Talk”, where business leaders share ideas taking advantage of the ample business opportunities in Africa and being part of the solutions the continent needs. About three months ago, she won the first BBC World News Komla Dumor award.

“Don’t happily be a spectator in your own economy,”

Monica Musonda, CEO of Java Foods, a Zambian based food processing company, said at the conference. The lawyer turned entrepreneur decided to start her own company after moving to Nigeria in 2008 to work for Africa’s wealthiest man Aliko Dangote. “It opened my eyes to business, to the different opportunities that our continent offers and to a new thinking. What inspired me the most about Nigeria was the entrepreneurial spirit – the fact that so many young people are taking the leap and working for themselves,” she said in an interview.

With encouragement from Dangote, Musonda decided to be an active participant in her country’s economy; she moved back to Zambia and set up Java Food.

“Do you want to be a spectator or a participant in the growth of your continent?”

“We must disrupt the political status quo …There is no one waiting to save us. We must save ourselves”

Named South Africa’s Most Influential Woman in 2012, this disruptive 35 year old is one rising political figure to watch out for in South-Africa.

“Somebody’s benefiting from the absence of excellence and disruption in politics, in your country.”