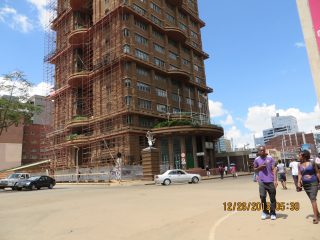 US lifts sanction on AgriBank and Infrastructure Development Bank of Zimbabwe

The United States of America has annulled a sanction placed 12 years ago on the Agribank and the Infrastructure Development Bank of Zimbabwe- IDBZ on May 27th, 2020. This was disclosed by  Agribank acting chief executive, Mr. Elfas Chimbera during an interview with The Herald.

In July 2008, the two banks were placed under US sanctions; five years later, there was a partial lift-off by the issuance of a license which permits business affairs with the two banks, but subject to limitations.

By February 2016, although the banks were removed from the sanctions list, there were still license requirements.

With the newly lifted sanctions, Zimbabwean’s banks can now engage in international business more easily and obtain lines of credit from the international monetary institutions.

“…Agribank has been expanding the search for correspondent banking relationships as well as regional and international lines of credit to support agriculture financing and development’’ said Agribank acting chief executive, Mr. Elfas Chimbera.

Mr. Chimbera also believes the development will reinforce the banks’ ability to build more banking and financial relationships while advancing medium and long-term lines of credit critical for agriculture financing and development,”

The newly lifted sanctions are traceable to 2008 when ex-president of the USA, George Bush frowned at the election victory of Zimbabwe’s former leader of 40 years Robert Mugabe. Several elections won by Mugabe were tagged as violent, corrupt and manipulative by international observers.

The timeline of Zimbabwe and America relationship recorded the first sanction in 2002, when the US placed a ban on the transfers of defence items and services (military aid), and also a suspension of non-humanitarian government-to-government assistance.

Economists in the country are hopeful that the lifted sanctions will transcend into further economic development across various sectors of the economy as the 2019 financial book of Agribank recorded a significant rise in profit of 155 percent from $13million, last seen in the previous year to $33 million, despite the economic turbulence in the country.