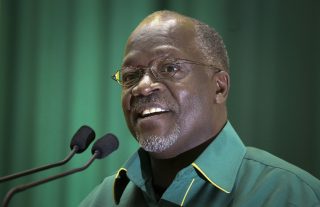 Remember when John Magufuli was elected as Tanzania’s new president and everyone thought he was the new Nyerere? Well, things have changed. Not only is he fighting corruption to a standstill, he also seems to be waging a war against democracy.

As part of new online regulations in Tanzania, and what looks like a war against free press and online media, bloggers will now be required to pay an annual fee of $930 before they can begin operations online. In addition to bloggers, social media activists, and online platforms ranging from radios, online streaming platforms, online forums and even internet cafes will also be affected by the new “Electronic and Postal Communications Regulation 2018.”

The bill also gives the Tanzanian government the right to withdraw licenses if content coming from some of these sites were deemed by the government to “threaten national security.” A blogger can also face fines for up to $2,200 for content that government thinks is ““indecent, obscene (or) hate speech”, or causes “annoyance”.

In a country where the average person makes just about $900 annually, this new bill will be quite chafing for business. It means the government has the prerogative for withdrawing license fees at will, but most importantly, makes the online media space devoid of free expression.

Analysts say this latest bill is the culmination of Magufuli’s fight against Tanzania’s media and free speech. And it could be the final nail to the coffin for democracy in Tanzania.

There has been a history of media repression in Tanzania, under-seen by Magufuli’s ruling party for most of Tanzania’s history. However, people expected better from the former chemist, who came in sailing through a flood of goodwill in 2015 when majority of Tanzanians voted for him. He justified this good will at first, ridding Tanzania’s public institutions of corruption by eliminating ghost workers on the government’s payroll, while also firing corrupt ministers in his cabinet. This earned him the moniker of the ‘Bulldozer’.

However, his frontal assault on the media began in 2016 when the Media Services Act was enacted. The act seeks to revoke self-regulation of the country’s media, while the government forms its own council to replace the independent media council in Tanzania. Other provisions from the bill can be found here.

Under his administration, many Tanzanians have been arrested for allegedly “defaming” the president, while media houses have been shut down for criticizing the president. Analysts say his attack on the media is to weaken the opposition. By reducing the avenue for meaningful discourse and criticism over his policies in the media, he ensures that the opposition will be weakened in Tanzania ahead of elections in 2020.

However, the immediate effect on his citizenry cannot be glossed over. Even before facing the possibility that they might not get their licenses after paying for one, $930 is more than what many bloggers in Tanzania can afford. “The fees that we are supposed to pay for licenses far surpass the revenues of many bloggers,” the secretary general of Tanzania’s Bloggers’ Network Frantz Mwantepele said.

Maybe that is the whole point of establishing a steep fee for free speech; so no one can afford to pay for it.