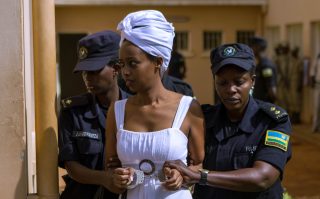 Diane Rwigara and her family’s anguish continues as Rwandan authorities have auctioned off more than $1 million worth of their family business. The 37-year-old activist, who was barred from contesting against president Paul Kagame last year in Rwanda’s presidential elections, is still in prison after she was arrested for forgery and for “inciting an insurrection.”

Diane Rwigara’s father and former head of the family business, Assinapol Rwigara, died in 2015 in a car accident, when the car he was driving was allegedly hit by a heavy truck. His family claimed foul play, with them alleging he was murdered for ending business with the Rwandan government, and hence fell out of favor with Paul Kagame.

Assinapol Rwigara was a known financier of the Rwandan Patriotic Front, Rwanda’s ruling party, during and after the Rwandan civil war. Rwandan activists have also claimed that falling out with Paul Kagame is akin to pronouncing a death penalty on yourself, either metaphorically or literally.

Diane Rwigara, who is also a popular activist for women’s rights in her country, announced her decision to contest against Paul Kagame in last year’s presidential elections in Rwanda, a move that apparently didn’t go down well with many people, including the president himself. While other opposition parties presenting candidates for elections were seen as proxy, her declaration seemed a real threat to Kagame’s eighteen year reign.

Attacks on her and her family soon began after that. First, her nude pictures were leaked online by anonymous people, to discredit her as a woman, then she was arrested by the country’s electoral board for ‘forging’ signatures for her candidacy to run at the elections, and also inciting an insurrection with her campaign rhetoric.

Rwigara’s mother and sister were also arrested and charged with tax evasion (for a business that had been affiliated with the government before), and for also inciting insurrection, according to Rwandan Police. Her brother, Aristide Rwigara told Al Jazeera in September last year that the charges were absurd, and authorities in Rwanda were inventing fresh ways to attack the family. All are still in prison awaiting trial.

Rwanda has come a long way since its civil war ended in 1994. About a million Rwandans were killed within a 100-day period in 1994, when members and affiliates of the Hutu majority government incited and carried out genocidal mass slaughter against minority Tustsis. A heavily armed Tutsi-backed Rwandan Patriotic Front army, led by present president Paul Kagame took back control of the country and displaced many of the Hutus responsible for the genocide.

Kagame became both Rwanda’s Minister of Defense and Vice president, and four years later, was elected as President by ministers and national assembly, rather than a general election, after the former president resigned. He might not have been elected traditionally, but he has stayed in power through legitimacy. He was elected into a straight fifth term in office last year after initially removing presidential term limits, and then garnering 99 percent of votes in the presidential elections.

Since he became president, Kagame has overseen a remarkable growth in Rwanda’s economy, making the East African country one of the fastest growing economies in the world with remarkable indices in healthcare and education.

However, his critics have accused him of silencing opposition members, and gagging free speech in the press. Many journalists have fled Rwanda to neighboring countries, fearing reprisal attacks after they criticized the ruling party and the president.

Many analysts have called Rwanda’s government an ‘authoritarian’ state. Diane Rwigara called Rwanda a “pretty girl with a lot of makeup, but the inside is dark and dirty” in an interview with Guardian U.K last year, after she announced to run for president. Her statement alluded to the fact that Rwanda is loved in the international community, even while it is denying some of its people their rights at home. While everybody loves and fawns over Rwanda and its ‘benevolent dictator,’ not all seems to be well with both of them.