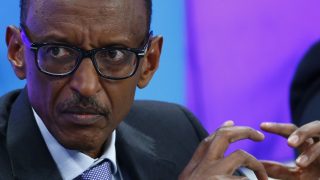 Qatar’s Chief of Staff Lt. Gen. Ghanim bin Shaheen Al-Ghanim led a group of delegated Armed Forces to Rwanda on a two-day visit which came to an end on Tuesday, January 7, 2020.

The Qatari general met his counterpart, Gen. Jean Bosco Kazura Rwanda’s Chief of Defense Staff and together, they chaired a meeting to review areas of their future cooperation. According to a statement released by Rwanda’s Ministry of Defense Force, Both countries are seeking to explore and strengthen areas of mutual defence and military cooperation amongst their nations.

Gen.Ghanim revealed that Qatar and Rwanda will “establish joint technical teams with different specialities (to explore areas of cooperation).” He added that both teams will have to work together to achieve results soon.

During the two-day visit, the Qatari general with his delegates paid a courtesy call on Rwanda’s Defense Minister Major Gen. Albert Murasira with which “fruitful discussions” on common military interest were made. Also, Gen. Ghanim proffered respect to victims of the 1994 Genocide against the Tutsi at Kigali Genocide Memorial.

This latest collaboration adds to the numerous projects Rwanda and Qatar have embarked on since establishing diplomatic relations in 2017. Other partnerships to strengthen their bilateral ties centre on Agriculture, Technology, Hospitality and Tourism, and more significantly Aviation.

Since 2012, Qatar Airways launched daily flights to Kigali and just recently sealed a 60 percent stake deal of the new Bugesera Airport worth nearly $1.3 billion in Rwanda. The deal for the airport which is currently under construction in Kigali was signed between the Rwandan government and Qatar Airways on December 9, 2019.

Relating to the Bugesera Airport, Qatar Airways and the Rwandan government signed three agreements that saw the two parties set up a joint venture to build, own, and operate the proposed international airport in Bugesera District. The airport partnership is centred on three components: construction, ownership, and operation of the infrastructure.