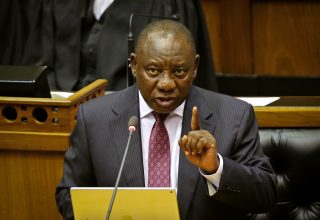 After his visit to Saudi Arabia, the United Arab Emirates, and Nigeria, South African president Cyril Ramaphosa is slowly restoring investor confidence in South Africa and could reach his $100 billion target before the end of the year.

According to South Africa’s ambassador to BRICS, the economic bloc of Brazil, Russia, India, China and South Africa, Professor Anil Sooklal, South Africa could reach its $100 billion investment goal in 2018. “The $100 billion is a modest target. I believe we will reach that in a year,” he said, while also remarking that Ramaphosa’s recent foreign trips have been a success.

In April, Ramaphosa announced that South Africa was looking to attract $100 billion in investments into the country in five years. He then appointed Phumzile Langeni, Mcebisi Jonas, Trevor Manuel and Jacko Maree as part of a Presidential Special Envoy of Investment to oversee new investments into South Africa. So far, he has managed to secure $20 billion in three weeks from his trip, drawing commendation from many analysts.

Cyril Ramaphosa’s charm offensive to Saudi Arabia, UAE, and Nigeria seem to have yielded positive results as he tries to reverse the fortunes of a country that is recovering from a recession. Saudi Arabia promised last week to invest $10 billion into the South African economy. Many of Saudi Arabia’s investments will be in the country’s energy sector- refineries, petrochemicals and renewable energy.

Ramaphosa’s visit to the United Arab Emirates was as a result of an invitation from the UAE President Sheikh Khalifa bin Zayed Al Nahyan. The UAE president promised to invest $10 billion into the South African economy, particularly in its mining and tourism sector, among many others.

Though he didn’t secure investments from Nigeria, Ramaphosa managed to convince its president, Muhammadu Buhari, to commit to signing the Continental Free Trade Agreement signed by many African leaders his year. He also promised security for Nigerians and their businesses in his country, alluding to alleged reports of xenophobic attacks on these businesses in South Africa. Nigerian SMEs are dominant in the small business sector of South Africa.

Visits to Saudi Arabia, UAE and Nigeria in the past three weeks have added to the returning business confidence in South Africa’s economy under Ramaphosa. Policy uncertainties under Jacob Zuma pushed the country into recession in June 2017, but while the country left recession later in the year, investor confidence took a nosedive as it hit a 32 year low in September. It then hit a 3-year high in March of this year, owing largely to Ramaphosa’s appointment.

Ramaphosa, who was deputy under former president Jacob Zuma, was sworn in as president in February after his boss Zuma stepped down due to corruption charges. And he promised to fight corruption, while also bringing more investments into South Africa.