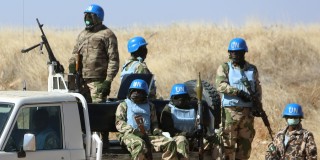 Peacekeepers are not doing enough to protect women in South Sudan

The war in South Sudan has eaten deep into the core of human values. Apart from the bloodshed and hunger raging the country, women have to go through the ordeal of getting raped by government officials. Imagine getting raped by the people whom the law protects? With no sort of voice whatsoever, you clean your wound, swallow some pain killers, and let the memory of that day torture you, because you know that justice won’t be served, and your rapist will make another girl, or woman, hurt even as badly as you do. Imagine being raped, imagine not being able to do anything about it, now imagine the situation of being raped, nursing your pain, and living in South Sudan! Not a pleasant trio I can imagine. According to reports, 70 percent of women across Protection of Civilian (POC) camps in South Sudan have been raped since the inception of the violence in 2013. So what exactly is the United Nations Mission in South Sudan (UNMISS) doing?

In South Sudan, there are currently 12,000 peacekeepers and police, protecting and aiding South Sudan’s six POC sites which host about 224,000 IDPs. But their presence hasn’t stopped the widespread prevalence of rape in South Sudan. What is more troubling than the rape statistics is the fact that these rape incidents happen within close proximity of the UN premises. In Malakal, a camp housing 30,000 people, where mass rape of women has been reported, the UN troops/ peacekeepers who claim to carry out regular armed patrols to secure the ground outside of the camp have been accused by people of not being present at all times. Even when they are present, they shamefully do not attend to reports of gender-based violence against women, when it is brought to their notice by the victims themselves.

“The security guards and the peacekeepers at the gate saw me being captured. But they did nothing,” Theresa, a resident in one of the PoCs said about the UN peacekeepers. What then is the importance of peacekeeping troops if they cannot guarantee the safety of people even when they are present? This isn’t the first time that the importance of peacekeeping troops has been questioned. If you can’t do your job, then why are you present in the first place?

In South Sudan, these questions of their importance have come up multiple times. The unrest of last year which sprouted in Juba that left scores dead and injured, arguably made us ask this question one more time. However, not everything is the fault of peacekeepers as UNMISS and peacekeepers have been rendered helpless with the movement restrictions imposed on them by government officials/security forces – the same people that rape women, and occasionally shoot them on sight.

“We are still being restricted from conducting patrols, across the country, not just in Juba,” said the UNMISS spokeswoman Shantal Persaud, who also highlighted that the freedom of movement is limited for the 12,000 peacekeepers and police in the country.

Another reason for the slow response or in this case, no response, could be the lack of coordination of in UNMISS, which caused the late reaction to the unrest in Juba, killing 70 dead and injuring 20. Two months after the violence, the Unmiss still did not conduct regular foot patrols, standing patrols or patrols outside its perimeter at night. A report on the mission said: “When the mission does conduct patrols, its soldiers peer out from the tiny windows of armoured personnel carriers, an approach ill-suited to detecting perpetrators of sexual violence and engaging with communities to provide a sense of security.” If the UNMISS, after the raid could not take patrol seriously after civil unrest, then it is wishful thinking for them to take it seriously at all.

However, if the peacekeepers of South Sudan decides to do their job finally, they still have to get fight through the idea that rape has not only become a culture, it has also become non-existent to the elders of Sudan, even the deputy mayor of Malakal.

“There is no rape at all. For me, it is Unmiss who are causing this. For [we] as Dinka [the ethnic group that largely supports the government], the problem of rape is cursed. When you do it you will not be tolerated in the community. But this language of the media almost creates a lot of problems. They exaggerate. There is no need for the UN to come out and protect the women coming here from the PoC. Protect them from what?” says Elias Biech, deputy mayor of Malakal city.

I beg to understand how rape can be exaggerated? How does one exaggerate her rape? How is it done? By calling the crime rape? His statement shows the blatant disregard of the topic of rape, by the people of Sudan and the international community, who have simply not done enough to curtail the violence. His question “Protect them from what” is easily answered. Protect them from him, a person doesn’t think that rape exists in the whole of Sudan. To have the confidence of dispelling rape completely shows that you do not even think it’s a crime in the first place. It’s like dispelling murder. Secondly, to protect them from Government troops, who have made rape their culture, and even take turns to taunt their victims before raping them.

Theresa’s story
Theresa, described her story of being raped, after which she went to a rape support centre, where they just gave her painkillers and nothing more. She was raped in broad daylight by five men of the Sudan People’s Liberation Army (SPLA), the national military force. They dragged her, few meters to the side of the road and raped her. This rape came after she was offered the options of choosing the person that will rape her or getting gang raped by all of them “I could choose the one who would rape me, or they all would. I begged them to kill me instead,” she said.