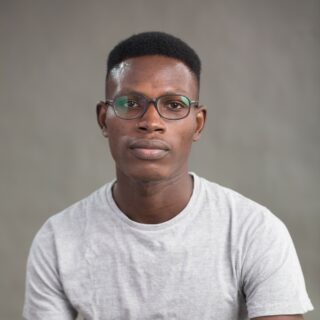 Oladimeji Ajegbile: How I made my first N100k

You know, that moment when you create a great Spotify playlist, You have figured out the theme, created a good structure,  picked the best songs, and enjoy how the symphonies melt into each other. That is how I would describe Dimeji Ajegbile, a great Spotify playlist. Dimeji’s career is a blend of positions that work in synergy. He studied architecture at Bells University of Technology and practices as an architect in the environmental branding space. He currently leads a multi-firm where he combines branding and architecture to create unique spaces for brands and businesses. He is also a brand identity designer and content creator with over 40,000 followers on Instagram. However, Dimeji did not become this beautifully curated playlist overnight. In this interview with Ventures Africa, he recounts his humble beginnings.

Dimeji was a first-year MSC student working as a landscaping architect when he made his first N100k  in 2015.

“The project was a refurbishment of the underbridges in Lagos. We were working to make the underpass in Lagos a little more interesting. We created the artwork and did a landscape in places like under the bridge in  Surulere, Stadium, Ojuelegba, etc. I was the lead architect of that project, I did the designs at the time. I was in the first year of my Master’s program. It was weird because I was getting out of the university when I got a contract,” he said.

When the time came for Dimeji to give an invoice for the job, he was nervous and did not know the amount to state because it was his first major project, and the firm was working with the Lagos state government.

“I was thinking, what do I tell these people? Because it was a massive firm and they were working with the Lagos state government, I thought “maybe 100k would be a good price,” but then I said N200k and the project director at the time agreed. I started working on the architectural plans, did the designs and the first presentation, and it was approved,” Dimeji explained.

When Dimeji got paid, he was excited. He quickly decided how to spend his first big paycheck. “I was paid 100k in advance, for the first time. I was like, wow!  This is huge! The first thing I did was buy a smartphone because I did not have one at the time. Then I saved the rest. By the time I finished the project and we were about to get into execution,  I got the balance of N100k. It was the first time I earned anything above 150k. It was exciting.” he stated.

After getting his first huge paycheck, Dimeji quickly learned a valuable lesson that money is difficult to earn but effortless to spend. It was essential for him to learn how to manage his finances. “One of the things I learned from making that money was that a lot of work goes into making money, but spending it is so easy. I exhausted the money in four weeks, except for the little I saved and the gadget I bought. It dawned on me that I needed to buy some other things so I learned this money ratio – I would save 50 per cent, invest 20 per cent and spend 30per cent on myself. I practised it and it improved my finances,” he said.

Financial decisions can make or break a standard of living and bad money decisions can lead to difficulties such as unsustainable debt. When Dimeji began to gain work experience, he made a strategic career decision that set him up for financial success. “During my early years working as a designer, I decided to invest in my skill by working pro bono all year. I took on so many projects that I was not paid for. I did this because I wanted to understand more about the business of design and creativity, how to interact with people/clients, master my craft and become a go-to person for most design needs,” Dimeji explained.

That decision helped his career. “The best money decision I made was to start earning in dollars. At the end of that year, all the people I worked around the world got me jobs via recommendation. I started getting jobs from clients and organisations in Canada, Italy, the UK, the United States and a few other countries. I got paid in foreign currencies. Learning that this was a reality, I kept my relationships with these clients going and expanded my foreign client base through referrals, recommendations, and doing good work,” he said.

Making smart money decisions early in life determines a stable financial future. Dimeji came to this realisation and applied it to his finances. “The best money decision young people should make early is to understand the 50-30-20 budget rule and apply it diligently,” Dimeji advised.