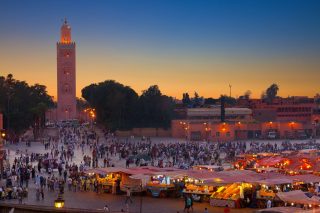 The tourism ministry of Morocco has reached a “co-marketing partnership” agreement with China’s largest online travel agency – Ctrip. The deal is aimed at promoting the North African country as a preferred destination for Chinese tourists.

“We are waiting for more Chinese tourists to visit Morocco in the future,” Morocco’s Head of Government, Saad Eddine El Othmani, said in an interview with Chinese media outlet Xinhua, during which he reiterated his nation’s desire to be a leading tourism destination for China.

The deal was signed last Friday in Rabat by the General Director of the Moroccan National Office for Tourism (ONMT), Adel El Fakir, and Executive Chairman of Ctrip, James Liang.

The agreement is set to be a key part of broader China-Morocco bilateral connections. And as noted by both parties, it is important that Rabat and Beijing invest in socio-cultural ties between their respective citizens as they seek to expand their political and commercial ties.

Asides tourism, Morocco and China enjoy a relatively smooth trade and economic cooperation and in recent times, the volume of bilateral trade between both countries has increased incessantly. Earlier in March, both countries signed a MAD140 million economic and technical cooperation agreement to finance joint public projects.

With Beijing seeking to diversify its investments in Africa, Morocco is witnessing an outpouring of Chinese interest, an article on AsiabyAfrica says.  “From trade to tourism, Morocco is quickly becoming a media darling in China, as the country’s stability, location and culture entice Chinese investment.”

According to El Othmani, the tourism cooperation between the two countries is “of great significance and will enhance mutual understanding between the two peoples and lay a foundation for further strengthening bilateral relations.”

Moreover, the partnership is expected to seal a relationship that began three years ago. In June 2016, Morocco announced a new visa policy for Chinese tourists. Thus, instead of having to get visas in advance, citizens from the Asian country can obtain them upon arrival in Morocco.

The number of Chinese people visiting Morocco has exponentially increased since the visa policy was implemented. According to the Moroccan tourism ministry, Chinese tourist figures rose from less than 20,000 when the policy was announced to over 180,000 in 2018.

While there has been a marked growth in the numbers, driven by the visa-free move, the goal of the new partnership is to attract as many as 500,000 Chinese tourists per year. Referring to the visa policy, El Othmani said that Morocco’s hope is to “become a privileged travel destination for Chinese.”