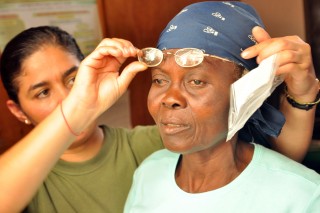 Meet the man challenging blindness through technology in South Africa

According to the World Health Organisation, there are 246 million people worldwide who have low vision and 39 million people are blind. But 80 percent of visual impairments can be prevented or cured. So, why are these figures still so high?

Dr Mapham, an ophthalmologist, found this question equally frustrating and decided to come up with a solution by creating an app that diagnoses eye impairments and refers individuals to specialists. His goal was to improve eyesight by educating people about different eye conditions and creating access to eye tests for people whilst connecting them to eye care professionals.

“After the operation, my eye was covered for two days. On the third day, I removed the patch and I could see. My life is so much better now. It was really bad when I was blind, I was even afraid to do a simple thing such as walking. I was afraid of hurting myself because I couldn’t see where I was going.” Those were the words of Njongile, one of the beneficiaries of Dr Maphram’s initiative. Njongile had cataracts, a condition that could have been corrected with a 20-minute routine surgery, but for years, she had lived in darkness due to the despondent fact that treatment is difficult to access because of the remoteness of her location in South Africa.

Whilst Dr Mapham volunteered in a rural area of Swaziland, he drove eight hours to diagnose patients, who after receiving such diagnosis, will embark on an eight-hour journey to receive treatment. When he couldn’t embark on the journey to diagnose eye impaired patients due to weather or logistics, a patient was often misdiagnosed- robbing them of a chance to live normal lives. And when they were not misdiagnosed, they had to travel long distances to examine their eyes in a hospital. This cycle motivated Dr Mapham to create an app called VULA which means ‘open’ in Siswati.

VULA Eye Health App, designed to improve eye care in rural areas, allows for health workers to capture basic patient and eye test information and share it with a specialist miles away in no time. This makes the referral process quicker than fax or phone. The app’s users, who are mainly health workers, are able to make use of a variety of functionalities, apart from the eye diagnosis function which it was created for.

How does VULA app work? VULA which is already a 4.5 star-rated app, works on IOS and android phones with a camera. This app functions as an eye test and a pupil checker; it uses graphics on the screen to test a patient’s vision. When a patient complains of eye trouble at a local district clinic, the healthcare worker takes down the patient’s complaint, tests the patient’s eyes, and takes a photo of the eye(s). The VULA Eye Health algorithm will inform the healthcare worker if the patient is to be referred to the closest facility for examination by an eye health specialist. The app also has a chat function for the purpose of the health workers to chat with an on-call physician to determine next steps for the patient.

For South Africa which has over 640,000 people who are blind or visually impaired, this app is no joke, and it is necessary to bring down these numbers. What VULA has become is a specialist away from a specialist, and a revolutionary kind of app. In the sense that it has become more than an ophthalmologist tool. Specialists from different fields of medicine have also begun to work with the VULA team to design functionality for their own specialties. This includes cardiology, orthopaedics, burns and even HIV/AIDS, which VULA added to their amazing app in April 2016.

VULA whose goal is to improve eyesight has done even more than that and has gone up into the word, to improve the lives of more individuals.

Dr Amy Linde, a rural healthcare worker who is part of the 400 nurses, doctors and health workers, that started using the app since its inception in 2014, says that it has helped patients connect with specialists, easier than before. She also said: “It allows us to access an experience level and a level of knowledge that we may not have ourselves, or, or you know things that we haven’t seen before.”

In 2013, Dr Mapham won the SAB Foundation Social Innovation Award. This prize money helped him to launch the app for Android and iOS in July 2014. But today, Dr Mapham has won our hearts and our spot in the 100 most inspiring examples of technology.