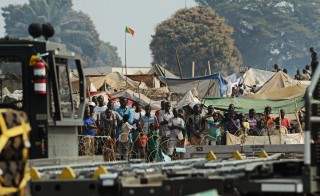 On Saturday, a renewed episode of religious crisis took place in Ndomete, Central African Republic (CAR). Muslim Seleka fighters were responsible for the violence that led to the death of 26 people.

Albert Mokpeme, the spokesman to the Presidency, called it a ‘massacre’. He said that the Seleka rebels went from door to door to kill the villagers, who were mainly non-Muslims.

“It was a massacre. There were 26 victims. The Seleka (rebels) went door to door … The village chief was among the victims,” he said.

The violence between Muslim Seleka fighters and the Christian anti-Balaka rebels later spread from Ndomete village to Kaga-Bandoro, a town of about 350 km to the north of Bangui.

The United Nations Multidimensional Integrated Stabilization in Central African Republic (MINUSCA) was able to halt further killings after dispatching its troops to separate the warring factions. The UN agency noted that it regrets the loss of lives in and promises to reinforce its personnel against further attack.

“MINUSCA regrets the loss of human life and the wounded that were recorded and also denounces attacks against the humanitarian community and United Nations personnel,” it said.

According to Human Rights Watch, religious crises in CAR have led to the death of thousands, millions of people have been internally displaced and many villages burnt down. The conflict was initially political but started changing formed after a military attack on the Seleka Muslim rebels in 2012. Eventually, it became a religious conflict after the Christian anti-Balaka rebels launched a reprisal attack in June 2013.