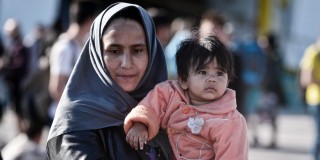 Dozens of Ethiopian women who make a living as domestic live-in workers in Lebanon are currently trapped in the country due to its financial crisis and the economic impacts of the COVID-19 pandemic.

The crisis has rendered employers incapable of paying salaries or buying plane tickets back home for these women while an anonymous comment by an Ethiopian official states that evacuation flights were canceled due to coronavirus fears and a dearth of mandatory quarantine space in Addis Ababa.

On June 3, the Ethiopian embassy in Beirut published a lengthy Facebook post saying they would not cover return tickets and encouraged its citizens to remain with their employers until the airport reopens at a date that remains unclear.

In the past couple of days, employers have driven and dropped off employees at the Ethiopian embassy in Beirut. According to reports, there are no immediate solutions for the stranded women because many of them were employed under the ‘kafala’ (sponsorship) system which ties their visas to their employers.

Worse of all, Ethiopian Airlines only accepts dollar payments for flight tickets. The unprecedented hike of the dollar in the black market, coupled with a prevalent recession in the Lebanese economy has further complicated living conditions for the women, reports say.

At least 150,000 Ethiopian women who live and work in the middle eastern country have migrated there in search of a greener pasture. Most of them do jobs that pay as little as $150 per month. These workers are not protected by the Lebanese labor laws but by a contractual agreement which makes their employers responsible for their welfare and legally bound to pay for their return tickets when the contract elapses and they wish to leave.

According to Zeina Mohanna, programme coordinator for support of migrant workers and counter-trafficking at Amel, a Beirut-based NGO, there are 182 000 domestic workers registered with local authorities in Lebanon, but thousands more are undocumented, most of which are Ethiopian.

Last April, a Nigerian live-in domestic worker, Peace Busari, was put up for sale for $1,000 by her Lebanese employer on a “Buy and Sell” Facebook page. According to reports, the employer uploaded her passport along with the post which read: “Domestic work of African citizenship (Nigerian) for sale with a new residency and full legal papers… she’s 30-year old, active, and very clean.”

This triggered an outburst in Nigeria as notable Nigerians like Dame Julie Okah-Donli, the Director-General of the National Agency for the Prohibition of Trafficking in Persons, called for the victim to be repatriated immediately. However, the Nigerians in Diaspora Commission claimed in a press release that Busari rejected and instead negotiated a fresh contract with another employer.

Kafala, originally an Islamic law, was further developed in the late 20th century to include a system of fixed-term sponsorship of migrant workers. It requires all unskilled workers to have an in-country sponsor (employer) who becomes responsible for their visa and legal status.  It became recognized as the Kafala system in the first decade of the 21st century and Beirut is notorious for the practice.

The practice, which has been sternly criticised by human rights organizations, makes workers vulnerable to exploitation from unaccountable employers, who take away their visas and subject them to various forms of abuse.

The kafala trend became popular among Ethiopian migrants in the 1990s due to displacement triggered by occasional drought, civil strife, and border fightings. While many died, millions of Ethiopians were displaced for decades. Meanwhile, the system has enabled remittances to become a vital source of income for impoverished families in the horn of African country.