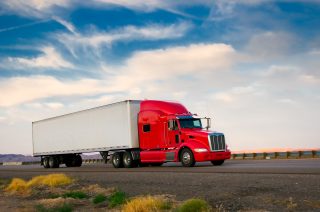 “Logistics is the bedrock of productivity and growth; the ability to move goods freely and rapidly across countries is critical.” – Ife Oyedele, Co-founder of Kobo360.

At the just concluded Africa CEO Forum held in Kigali, Rwanda, Nigerian logistics startup Kobo360 won the award for Disrupter of the year. Dubbed the Uber for freight services, the startup, which is a little over a year old is tipping the balance for cargo transportation in Nigeria by connecting truck owners with producers and distributors for long haul trips.

The startup launched in December 2017 with Honeywell Flour Mills as its first client and has grown to include other top clients like Olam, Unilever, Lafarge, Dangote, and DHL, making over 2000 deliveries monthly with a fleet of over 10,500 trucks, all aggregated. Registered truck owners and drivers are trained in local languages on how to use the Kobo360 application. They also get access to benefits including working capital, asset financing, diesel discount, and discount on auto parts.

According to Ife Oyedele, Co-founder and CTO of Kobo360, the company was established to catalyse the static industry of long haul logistics in Nigeria and to curb massive inefficiencies that pervade it. “We started by identifying the logistics challenges that were in the market,” Oyedele told Ventures Africa.

“We saw that a lot of customers did not have visibility and transparency on their goods moving across the country and most importantly, didn’t even have the capacity that was required. Hence we decided to figure out a way to meet their needs,” he said. Little wonder that a majority of Kobo360’s clientele are people in the fast-moving consumer goods industry who did not have enough trucks to get their goods to the end-users, and to do that promptly.

By effect, the company is also tackling the inefficiencies in Nigeria’s agricultural industry to improve food availability and food security. 40 percent of agricultural commodities in Nigeria go to waste due to poor logistics. This is costing the country over $700 billion annually. Kobo360 is working with farmers and stakeholders in the agricultural sector through a new project, the Kobo Urban-Rural Seeders Micro Aggregation Network(KURSMAN) by providing visibility, transparency and swift delivery of goods and services to reduce waste.

In its 15 months of operation, Kobo360 has raised a total of $7.2 million. Last summer, the company got accepted into Y Combinators class of 2018 and gained a $1.2 million working capital in pre-seed funding. It further raised $6 million in an IFC-led investment by Y Combinator in December. This money is being used for strategic program expansion within the company with projects like KURSMAN, KoboCare and KoboWin. The latter offers drivers training and group programs on insurance, discounted petrol and vehicle financing. While KoboCare gives drivers an HMO and an incentive-based program to pay for education.

The company has also invested in its recruitment and building a more physical presence across Nigeria. “We’ve hired very quality engineers, quality team members to aid in our expansion plan,” Oyedele said. “And we are opening small hubs across Nigeria to help operations with closer access to trucks on the move.” There have also been improvements to the company’s application to include specific features and solutions that enable clients to track movement and sales of goods. Plus the addition of local languages to better communicate with Kobo drivers.

So far, the challenges pervading Nigeria’s seaports have in turn posed challenges for Kobo360. Nigeria’s seaports have gone down global rankings in the last five years, due to bad infrastructures. The country also needs additional seaports. Despite having six seaports only the Lagos ports are operating near full capacity. The Tin Can and Apapa ports account for about 80 percent of imports into the country. This has led to excessive traffic around port areas in Lagos.

In terms of what can be done to aid Nigeria’s logistics industry, Kobo360 would love the government to hone in on the issues affecting the country’s ports and also accelerate ongoing works at the Tin Can Apapa port area to ease the flow of traffic within that area. “Recently we’re seeing changes where there are fewer delays and we are hoping that these initiatives will carry on further and all the construction around our port areas will be completed soon,” Oyedele told Ventures Africa.

With an ongoing expansion plan into Ghana, Kenya, Togo and Cote D’Ivoire this year, Kobo360 is hoping to replicate all that it’s done in Nigeria; add value to spaces where there are challenges by increasing capacity and delivery time. Curbing inefficiencies in these countries with massive terminal ports are critical to improving trade between African countries.

Oyedele believes that companies like Kobo360 and the minds behind them can help drive the new Continental Free Trade Agreement and play a significant role in improving the continent’s economy. “Through our platform, we, directly and indirectly, impact the income of over 4000 people. With a free flow of trade across Africa that number can triple or quadruple overtime,” he said. “If they can get talented active young minds focused on execution and strategy building to help launch and drive the trade agreement, I believe that it can support job creation.”

He also hopes that the CFTA will be free of certain border challenges like custom delays that trailed the ECOWAS. “Although the CFTA is a global pan African initiative we need to focus on how we can make it locally efficient. We hope that with the CFTA and other trade agreements there will be a better flow of access and information, and policies that actually support our business and consequently job creation and economic growth,” Oyedele said.