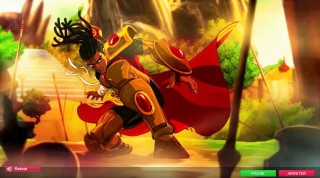 The growth of Africa’s comic culture has given rise to the likes of Comic Republic with superhero characters and lifestyles that Africans can finally relate to and the reception so far has been incredible. However, a young Cameroonian may just have taken this initiative to the next level. Madiba Olivier, who has always enjoyed video games, is now pioneering his own brand of games with African content and characters in central Africa by incorporating African folklore.

Olivier decided to invest in his passion by establishing Kiro’o Games, central Africa’s first video game studio that is creating a new narrative and visual benchmark for the gaming industry. With their latest project, Aurion: Legacy of the Kori-Odan, an action-RPG (Role Playing Game), the studio intends to unify and transmit African culture by combining various myths, tales and traditional values into the gaming experience.

“The history of our continent is rich … we took inspiration from local Cameroonian traditions, like the Ngondo festival celebrated by the Sawa people, and we also incorporated symbolism adapted from that of the Akan people of Ghana, specifically the Adinkra writing style,” said Olivier.

Aurion: Legacy of the Kori-Odan is set in a world of elemental energies and ancestral powers, where players assume the role of a traditional ruler, Enzo Kori-Odan, rightful ruler of the Zama kingdom, who uses the Aurion power granted him by his ancestors to regain control of his kingdom.

Initially named Madibao Corporation Studio, Kiro’o Games was established in 2003 by Olivier Madiba with two of his friends, Yakan Dominique and Waffo Hugues. The name Kiro’o is derived from “kiroho maonno” Swahili for “spiritual vision.” However, establishing and pioneering one of Central Africa’s first indigenous video games was not easy. Aside tackling daily power outages, the company’s business director, Boyogueno Roland, said it was quite difficult to get initial funding because investors were sceptical of the project.

“We started the project in 2003 but it was very difficult for us to find funding in the first place,” he said. But with the support of Cameroon’s ministry of arts and culture, Kiro’o Games got the much needed credibility it sought.

The project also got a successful crowdfunding campaign on Kickstarter gaining $50,000 in support from backers. And regarding power cuts, the company has resorted to the use of solar energy for future projects. However, the company would like to gain more trust and support from local investors. According to Roland, the business can be profitable, and its success would encourage other Africans to delve into the gaming industry.

“Our continent is rising and it is important that as young Africans we contribute to its development.” – Madiba Olivier, founder of Kiro’o Games.

With the increasing proliferation of technology and mobile devices, video games are way more profitable than other gadgets or toys due to their capability to reach a wider audience. Currently, the video game industry is of increasing commercial significance globally. Last year, the industry generated $74 billion and ranked the third-largest sector in America’s entertainment market, right behind broadcast and cable Television.

Typically, Kiro’o Games aims to expand its operations in the future, with plans to add additional downloadable content after the PC release, and on to making the game available for consoles like PlayStation 4. With the likes of Olivier and emerging companies like Kiro’o, video game design sure has a future in Africa.

Watch video below to see the game’s exciting trailer: