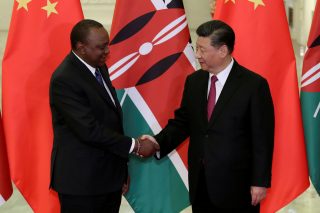 Kenya has been working to get greater access to the Chinese market which has a population of about 1.4 billion people. Between August 30 and September 3, 2019, several events were held in Beijing to promote products from the African nation.

During Kenya Day at the ongoing 2019 Beijing International Horticulture Exposition, Nairobi promoted its tourism, trade, and investment through the Centre for Cultural and Commercial Promotion of Kenya, The East African reports.

The Beijing Expo is a global event that allows countries to showcase their distinctive cultures and strengthen ties in areas of agriculture and horticulture. This year’s edition started on April 29, 2019, and will close on October 7, 2019.

The promotional efforts are just part of a broader strategy aimed at increasing exports to the Asian giant. Banking on its good ties with China, Kenya hopes to increase its exports to Beijing by an annual target of 20 percent according to the Principal Secretary for Trade, Dr Chris Kiptoo.

“In 2018, Kenya exports to China increased by 10 percent,” Dr Kiptoo said. “This year, we hope to make it 20 percent. Kenya Day provides a platform to showcase products such as horticulture, services, tourism, culture, sports, and manufactures.”

Kenya enjoys a relatively smooth bilateral relationship with China. Though Beijing is one of Nairobi’s biggest trading partners with import materials ranging from electronics to automobiles, records show that trade between both nations is lopsided, largely in favour of China.

In 2017, Kenya’s exports to China amounted to $96.88 million while imports were valued at $3.79 billion, with China accounting for 17.2 percent of Kenya’s trade with the world. Last year, Kenya exported goods worth over $111 million to China while it imported goods worth $3.7 billion.

Earlier in May, Kenya’s Ambassador to China, Sarah Serem, stated that the imbalance in trade with China exists despite the fact that Kenya exports some of its locally manufactured goods to the country. This imbalance, she believes is due to the lack of awareness on what Nairobi produces that can be exported to Beijing.

Moreover, President Uhuru Kenyatta during his visit to Shanghai in November last year urged the Chinese government to implement measures that can raise the volume of goods coming from Africa to China.

Considering the Kenyan government is currently focused on agro-processing and housing under President Kenyatta’s Big Four Agenda, Dr Kiptoo called on China to consider investing in Kenya through joint ventures with local companies or through public-private partnerships.

Presently, Kenya exports various agricultural products such as food, vegetables, and meat to the Asian nation. There is also an avocado export deal in place which allows China to buy 40 percent of Kenya’s avocado produce.

But apart from agriculture, housing, and manufacturing, Kenya is also looking to attract Chinese tourists. “We will also use the Expo to showcase other opportunities in Kenya such as tourism,” Serem said at the time. While the Chief Administrative Secretary at the Foreign Affairs Ministry, Ababu Namwamba, wooed the Chinese to visit Kenya as tourists.