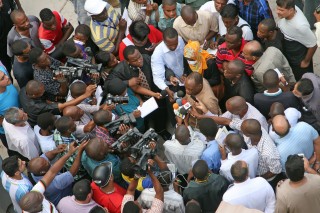 #JournalistNotTerrorist: Nigerians have become immune to their government’s propaganda

It is said that the first casualty of war is the truth … It is also said that there are at least three sides to every truth – yours, mine, and the actual truth.

Simply put #JournalistNotTerrorist is a social media campaign aimed at un-labelling a journalist who has been labelled a terrorist.

It is a globally adopted social media campaign often directed at governments by the public to propagate the gospel of a free press.

Your pick. If my definition doesn’t cut it for you … Oh well.

The hashtag is often used to demand justice or a fair treatment of journalists who have been wrongly arrested, accused, or imprisoned by authorities.

Ok. So why is this in the news today?

Good question. Because it’s trending on Twitter Nigeria. And it’s been trending for two days.

Read the latter part of my title. Yes. Nigerians are tired of the authorities’ deviousness, and are not falling for it any longer.

Just spit it out already, what happened?

So, on Sunday August 14, Boko Haram released a video showing some of the Chibok girls. But before the group made the video public, they had sent it to Ahmad Salkida, a journalist who has a “journalistic relationship” with the jihadists. Having received the video, Salkida went on social media giving commentary on its content before it went public.

Just In: Jama‘atu Ahlil Sunnah Li-Da‘awati Wal-Jihad #BH has released a video showing the abducted #Chibokgirls and restating their demands.

I'm studying the video of the #Chibokgirls that was sent exclusively to me before their abductors upload on it YouTube later. @BBOG_Nigeria

When the video finally went public, authorities declared Salkida and two others WANTED for their links with the group.

Well, I see nothing wrong with the actions of the Nigerian government and the military.  They have every right to declare the journalist wanted. Why would a terrorist organization send footage to one person before making it public? And why him – Salkida? Who is he?

Woah! Woah! Slow your roll. One question at a time.

You are right. The authorities have a right to declare whoever wanted. But you see, they got you right where they want you. You. Not me, and certainly not hundreds of thousands of Nigerians who are rooting for Salkida on social media with #JournalistNotTerrorist.

The answer to your first question is in the second, and the second in the third.

Who is Ahmad Salkida?

Salkida is a freelance journalist who has long held rare access to Boko Haram. Yes, the man has ACCESS to the terrorist organization. They converse. In 2009, he interviewed the group’s founder, Mohammed Yusuf, and in his own words,

“As my reports appeared, the confidence of the sect’s leadership in my professional judgment grew. At a stage the leader asked me for some professional advice on his intention to set up a newspaper. Soon, ours became a relationship, but for me it was simply the relationship between a reporter and a vital news source. It was a relationship defined by mutual respect.”

You can read the rest of his story, Reporting Terrorism in Africa, a personal experience with Boko Haram here.

Even after the Yusuf’s death in 2009, his relationship with the group was maintained. The group will occasionally inform him of attacks before they were launched, which he in turn will relate to security agents. But this “unlikely” relationship earned him a stigma, a label – a terrorist. Forcing him into self-exile in Dubai.

But he still has questions to answer anyway?

Who said he doesn’t? He sure does, and he will. Salkida has never been one to shy away from interrogations from the authorities. And has been instrumental in being a mediator between them and the group. According to a recently released statement, he has been to Nigeria three times on the invitation of Federal Government. The government is well aware of his whereabouts.

So why declare him WANTED then? Why not simply invite him over as they have done in the past?

Now you get it. Now you’re asking the right question. Have you seen the video? See what the government and the military is being accused of? Which, by the way, was the first thing they reacted to before shifting tactic to propaganda. Here, let’s play out a possible scenario:

The Nigerian military: They have accused us of killing some girls via airstrikes. These are grave allegations. Very soon, human rights organizations will be upon us, Nigerians and the international community will scream “incompetence”. What shall we do?

The Nigerian government: Let’s distract them.

TNM: Brilliant idea. What technique of propaganda shall we employ?

TNG: Use two – Name calling and Bandwagon. Declare them wanted because of their links and access to the group. Don’t forget to cite a section of an established law, preferably the Terrorism Prevention Act 2011, as backup. Then canvass the support of the public in helping you get these criminals. That way, they feel that they are a part of a good cause.

TNM: Okay. We will do just that.

Wow! They really are good at this.

Errr … Like a while back maybe. Because clearly, Nigerians did not fall for it

The sad thing is that BH will be mocking us now. We have ignored the video and turned attention to Salkida #JournalistNotTerrorist

I defended @ContactSalkida in the past, praising his adventurous reporting and human rights. #JournalistNotTerrorist pic.twitter.com/VkZyEeKojz