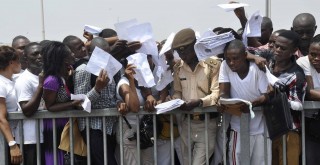 At the annual meeting of the African Development Bank (AfDB), which started on Tuesday the 24th of May 2016, one of the issues raised was youth unemployment in Africa. According to the United Nations, there are over 200 million young people in Africa which makes it the continent with the most youthful population in the world. While statistics show that 10 to 12 million young Africans enter the workforce each year, there are only three million jobs created annually. This is probably the reason for the rising number of the unemployed African youth; over 60 percent of qualified graduates meet a dead end upon their entry into the job market.

At the meeting where the continent’s surging population has been described as a “time bomb,” Akinwumni Adesina, the AfDB president, encouraged a sense of urgency in tackling the issue of unemployment. The Bank Group’s Strategy for Jobs for Youth in Africa 2016-2025, aims to improve the conditions of living for Africans by turning the continent’s swelling population into an opportunity for inclusive growth. Here’s how the AfDB intends to achieve this grand scheme:

The AfDB has noted that it will focus on three prime sectors in the economy – agriculture, industry and ICT. In order to achieve youth integration in these areas, an index will be used to measure youth employment outcomes. The Bank proposes that the use of this index will spur policies that will be favourable to youth employment.

Tony Elumelu, the founder of the Tony Elumelu Foundation Nigeria, emphasised the need to strategically invest in African youth. “The way to address jobs for the youth is to look for solutions within [the continent] and then to work together,” he said. AfDB has pledged technical and financial support to African countries, in order to help them achieve and implement promising solutions.

Adesina highlighted the importance of possessing skills and not just a degree when he said, “It’s not going to be about degrees – those are labels – it’s going to be skills.” Therefore, in accordance with AfDB’s goal to improve the quality of life for Africans, it will work towards building a skills base. Research has shown that youth in Africa often lack requisite skills to compete favourably in the labour market, despite their level of education. The bank intends to train the youth in order to develop their skills.

While the strategy to create 25 million jobs for the youth is necessary and laudable, how sustainable would it be? Experts have projected that by 2030, the population of Africa’s youth, which currently stands at 19 percent, will have increased to 42 percent and that number would have doubled by 2055. Will Africa be free from the burden of youth unemployment or will it get worse?