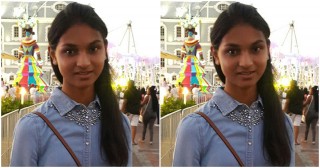 Kiara Nirghin, a sixteen-year-old girl, has just won the regional award for Middle East and Africa in the Google Science Fair’s Community Impact Award. This prize is for her revolutionary invention – No More Thirsty Crops. Like the name denotes, Nirghin’s creation seeks to address drought issues currently plaguing South Africa.

Using both orange and avocado peels, the teenager created a super absorbent polymer (SAP) that acts as a reservoir in the earth. The material is said to hold three hundred times more than its weight in liquid, relative to their own mass, “keeping crops hydrated for longer at a much lower cost.”

“I sought to create a product that can improve soil quality, preserve water and resist drought, therefore producing a better environment for crops to grow,” a part of her research report read. She went on to explain that SAPs must be harmless and non-polluting with super water-absorbing and preserving capabilities.

As stated in her research report titled ‘Combatting drought with a Low-Cost, biodegradable Superabsorbent Polymer made out of orange peels,’ Nirghin discovered, that naturally occurring polymers exist in most citrus fruits.

“Orange peels contain over 64 percent of polysaccharide making it a candidate for biodegradable polymer. However, the polymer has to be cross-linked usually requiring chemicals such as Sulphur and Hydrochloric acid. I have explored an organic cross-linking method using UV light and heat.

Emulsion polymerization was then conducted by using natural oil found in avocado peels and adding it to boiled orange peels. The product is then left in the sun, utilizing photo polymerization.”

Nirghin’s invention doesn’t just tackle the effects of drought, it also serves a means of converting waste into something useful. The teenager, who is obviously delighted by the result of her home-based experiment, says she would like to experiment further, make large amounts of orange peel SAPs, and apply it to crops such as maize and wheat in poor communities in South Africa. “With the use of the orange peel SAP, in agricultural drought disaster areas food security could increase by 73 percent.”

South Africa is currently going through its worst drought in 35 years, with over 2.7 million households facing water shortages across the country. There are increased job cuts in the agricultural sector as farmers sell off their land, due to a lack of access to funds. According to reports by The Inquisitr, about 15,000 of the 35,000 commercial farmers are struggling because of the latest drought.

Nirghin’s invention is sure to alleviate the effects of drought, not just in South Africa, but in several other countries around the world. It will also help countries manage the effects of climate change for years to come.

In her submission, Kiara Nirghin described herself as an individual who absolutely loves chemistry and physics. “I have always had a great love for chemistry since I was young. I vividly remember at the age of 7 experimenting with vinegar and baking soda solutions in plastic cups. My natural curiosity and questioning nature has sparked my everlasting love of science.”