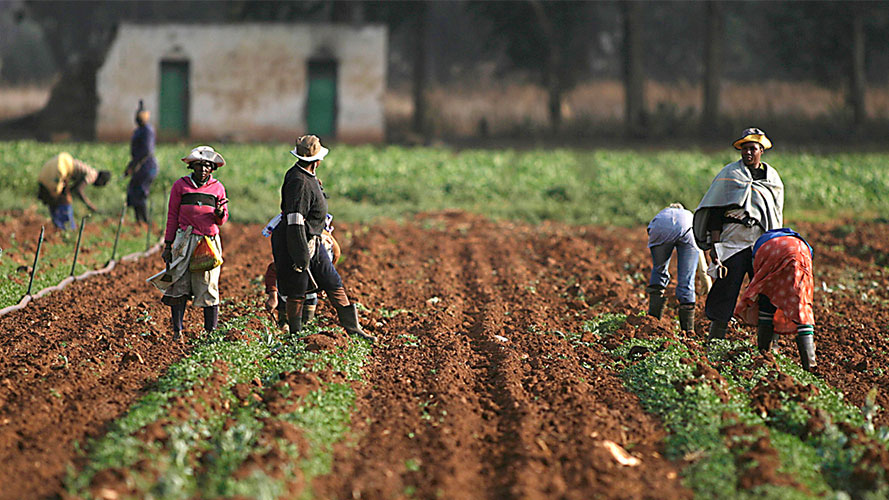 How Bill Gates Plans To Help Africa Feed Itself

VENTURES AFRICA – Seven out of ten people living in sub-Saharan Africa are farmers, according to a recent publication by the Bill&Melinda Gates Foundation. Despite this, about 30 percent of the population was hungry in 2010. The region still relies heavily on imports and food aid to feed itself and spends $50 billion a year, buying food from richer countries. This is partly because African farmers are not productive enough. But World’s richest man, Bill Gates and his wife, Melinda, have committed themselves to ensuring Africa is able to feed itself by 2030.

“The world has already developed better fertilizer and crops that are more productive, nutritious, and drought- and disease-resistant; with access to these and other existing technologies, African farmers could theoretically double their yields,” the couple wrote in the 2015 Gates Annual Letter.

The philanthropists have invested billions of dollars in projects aimed at improving the lives of the world’s poorest people through the Gates Foundation. And they believe that with greater productivity, farmers will also grow a greater variety of food, and will be able to sell surpluses to supplement their family’s diet with other nutritious foods lacking in some African diets. But the need for improved productivity just dawned on Gates. In 2008, it was about all helping Africans sell their crops.

Bill Gates partnered Howard Buffett (Warren Buffet’s oldest son) in 2008 to invest over $75 million in helping small African farmers and Latin Americans sell their crops as food aid. The donation, made through their Foundations, was keyed into a five-year pilot project called Purchase for Progress. The project helped about 350,000 small farmers in 21 countries, most of them in Africa, to grow food for the U.N.’s World Food Program, the biggest food aid distributor in Africa.

According to World Food Programme (WFP), through the initiative, hundreds of thousands of poor farmers can “gain access to reliable markets to sell their surplus crops at competitive prices”.

While Purchase for Progress recorded a lot of success in several countries, the challenges that became clear as a result of the initiative might have driven the founder of Microsoft to commit more to Agriculture in Africa. As part of Bill and Melinda Gates’s Our Big Bet For The Future, the couple made it clear they are committed to seeing Africa capable of feeding itself in the next 15 years, using innovations in farming. The Foundation intends to tackle challenges relating to some important factors to achieve this.

The American billionaire noted that Agricultural Extension — the process by which farmers get information; what seeds to plant, how to rotate crops to protect their soil, how to get the best prices at market — is complicated and expensive. This is one of the major factors affecting the productivity of farmers in Africa. When there are experts to break the process of Agricultural Extension down to farmers, they are usually gender-biased, focusing more on men, who in the real sense are not as engaged in farm labour as women on the continent. The Gateses, however, expressed hope that this trend will change, as information will be able to go out to everyone who has access to a mobile phone, via text messages.

“We need to reach as many farmers as possible, because the challenges farmers face are growing more difficult,” the letter read.

Data from UNICEF shows that Africa’s population at the end of 2015 will hit 1.16 billion. This is expected to grow to 1.63 billion in the next 15 years. That’s 470 million more people for African farmers to feed!

The Gateses stated that climate change will make farming more difficult in the coming years, with more droughts and more floods expected at some periods. “Bigger variations in the weather will mean both more bumper crops and more poor harvests — which makes raising productivity and improving food storage crucial.”

But they stop short to note that if farmers can grow and store more food, riding out the lean years will be easier on the continent.

Besides not being productive enough, African farmers also face the dearth of necessary infrastructure. The philanthropic couple cited the case of the Democratic Republic of Congo. The central African nation is the size of Western Europe and has a population of more than 60 million, but it has fewer than 2,000 miles of paved roads. Trading within Africa can be so difficult that it’s often easier to fly food in from other continents than to drive it a couple hundred miles within it.

The Gateses, however, believe that Africa is rising to the occasion as countries are building better roads. By widening the highway that connects Ghana’s agricultural heartland to its airport and seaports, the West African country has cut travel time through its interior by more than 70 percent. Countries like Senegal are also removing the constant checkpoints that make overland transportation so burdensome.

With the adoption of better crops and fertilizers, growing more varied and nutritious food and getting them to the people who need it at the right time, Africa can achieve food security by 2030. “It will still import food when it makes sense to do so, but it will also export much more, eventually achieving a net positive trade balance. Famine will strike less often — and when it does, it will be African countries that take care of the response,” the 2015 Gates Annual Letter read.

Falling global oil prices is already forcing countries like Nigeria, Africa’s largest economy, to focus more on Agriculture. Improving the sector, which is the backbone of the continent’s economy and the biggest employer in many countries, can drive massive poverty reduction and improve lives significantly.