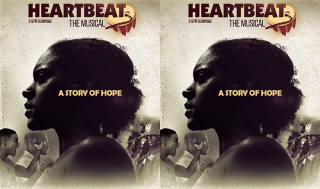 Heartbeat, a musical by Olu Jacob and Joke Silva, is set to change Nigeria’s awareness of the distinct genre of musical theatre

Musicals: A fusion of dialogues, songs, and dance performed on stage. A distinct genre of theatre that often embodies relatable narratives and themes of love, life, family, and other affairs in and around the human existence. One that the Nigerian audience is not so familiar with, save for the likes of iconic Hollywood musicals (movies) like Sound of Music, Les Misérables, and The Phantom of the Opera.

But Lufodo Productions, the stage and film production company of Nollywood’s star couple, Olu Jacobs and Joke Silva is set to hopefully change Nigeria’s awareness, and connection with musicals, with its largely publicised musical theatre production – Heartbeat: A New Beginning.

As described by the producers, the musical’s narrative is one of hope, but more than anything it embodies the essence of the ethos behind the all too popular phrase(s), “United we stand…” or “Strength lies in union.” Heartbeat tells a story of a well-known homeless shelter, Grace House, and how its residents must come together despite their personal differences to fight an ongoing battle within their local administrative division, or else lose ownership of the only place they call home.

The musical’s narrative which is set in the city of Lagos, “explores the themes of love, hate, betrayal, family, identity, politics, homelessness, and social justice through the characters who converge in and around Grace House in search of refuge and atonement.”  Recently premiered at the Muson Centre in Lagos, the play boasts a cast ensemble of 33 people and 120 crew members. A good number of them being fresh faces in the industry save the likes of famed actor, Femi Jacobs, who plays a prominent character.

The musical features originally composed emotive soundtracks that cut across diverse genres, including classical, contemporary African pop music (Afro-pop), highlife, musical poetry and the traditional musical theatre style. All of which were composed and produced by Tosin Otudeko and Efosa Lawal. While the entire play was written by Tosin Otudeko and Debo Oluwatuminu, with Najite Dede as director.

Although Nigerians may not be familiar with Lufodo Productions, the film and production company was long established in the 80’s by Olu Jacobs and Joke Silva, Nollywood’s power couple. The company has produced and staged a series of plays, the most popular being Wole Soyinka’s Lion and the Jewel and Sefi Atta’s The Naming Ceremony performed at the 2012 London Olympics.

Hopefully, with Heartbeat: A New Beginning, Lufodo Productions would succeed in getting Nigeria’s mainstream audience more involved with theatre performances and also change their awareness of the distinct genre of musical theatre.

For more insight about the production, please watch the video below: