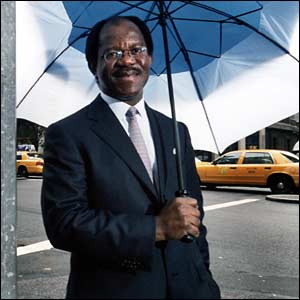 Goldman Sachs Appoints Adebayo Ogunlesi To Its Board

The Nigerian-born investment banker who bought London’s Gatwick Airport, Adebayo O. Ogunlesi, has been added to the board of Goldman Sachs, as an independent director.

“Our board and our shareholders will benefit from Adebayo’s wealth of knowledge and rigorous thinking,” Lloyd Blankfein, Goldman’s CEO, said in a statement. “He has advised companies and institutions around the world and invested in many of the most important sectors in the global economy,” he furthered.

The appointment of the investment banker makes him the eleventh director on the current board of Goldman Sachs, which has a total of nine independent directors.

Mr. Ogunlesi, son of Nigeria’s first professor of Medicine, attended the prestigous King’s College Lagos, received a B.A with first class honours in Philosophy, Politics and Economics from Oxford University, a law degree and MBA from Harvard University. He practised law for two years at Cravath, Swaine & Moore before pursuing a career on Wall Street.