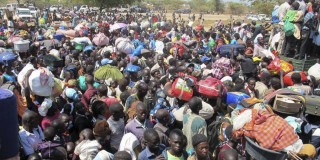 “Food rations to more than 1.4 million vulnerable refugees in Uganda have been cut”-WFP

The World Food Programme (WFP) recently disclosed that due to insufficient funds food rations for more than 1.4 million vulnerable refugees in land-locked Uganda has been cut. Revealing a 30 percent reduction to the relief food it distributes to refugees and asylum seekers, WFP in the East African country warned that further cuts could follow.

Uganda hosts more refugees than any other country in Africa, with fugitives mainly from neighboring countries like South Sudan, the Democratic Republic of Congo and Burundi. Although food is largely available in Uganda, over 12 percent of the total population in the country is chronically food insecure owing to major limiting factors such as low level of incomes, storage, inadequate nutritional awareness, poor sanitary and wastage of food during harvest periods due to festivities.

El-Khidir Daloum, WFP country director in Uganda, told the Guardian that the agency is faced “with a significant funding shortfall for its refugees’ response – $137m against the total needs of $219m through the course of 2020.” Daloum added that if immediate support is not given to WFP, “refugees often resort to desperate measures to feed themselves and their families.” When there is food shortage, it leads to an increased level of malnutrition, incidents of domestic violence will heighten, and “some refugees may turn to negative coping mechanisms such as survival sex just to put enough food on the table,” Daloum said.

Consequently, “young girls may be forced into early marriage and children may be forced to drop out of school to help their families survive,” the WFP country director in Uganda revealed.  With 55 confirmed cases of COVID-19 in the East African country, the government extended the lockdown by 21-days raising fears as to how nationals and refugees will cope during the period. Activists warn that the food cuts by WFP are set to further complicate the lives of hundreds of refugees whose small businesses have been paralyzed by the nationwide imposed shutdown.

The extended lockdown which is to end on May 5, 2020 “will possibly reduce farming, working or business by refugees trying to fill the gap caused by the cuts,” Daloum said. In addition, Dismas Nkunda Executive Director of Atrocities Watch Africa stated that “the likely impact is that refugees will suffer disproportionately since that (food rations) is their major source of livelihood.” Nkunda added, “this means that starvation and hunger during the COVID-19 lockdown becomes a double jeopardy.”

Without sufficient relief assistance, refugees will be unable to transition to self-reliance during this period. Duniya Aslam Khan, the spokesperson for the United Nations’ refugee agency in Uganda, said: “UNHCR believes that it’s critical that WFP receives the necessary resources to ensure a stable food pipeline for refugees and to avoid a vicious cycle of poverty, hunger, and risky coping strategies.”

As the world is focused on tackling the COVID-19 pandemic other aspects of life should not be neglected. Humanitarian assistance is needed to limit the effects of the virus with regards to food insecurity, and as such, contributions to humanitarian organizations are required to aid people experiencing food shortage, especially refugees with no source of income.