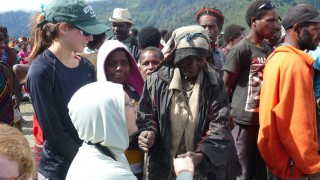 This is the problem with the ‘white saviour complex’ in Africa

A caption on renowned innovator and social change advocator, TMS Ruge’s Facebook page aptly captures the frustration that most Africans and Black people feel when certain [White] individuals define charity and their all-around good intentions as human beings by a ‘visit’ to the underprivileged in Africa. Although the actions of these individuals are not necessarily the issue, those actions result in highlighting an even bigger social issue surrounding racism in Africa which appears to be modifying. No thanks to the individuals with the ‘white saviour complex.’ 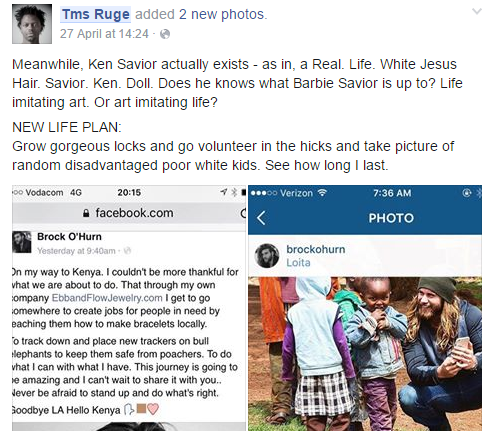 In this case, the culprit is an Instagram sensation who recently posted his visit and charitable activities in Africa on social media. His posts describe the happiness he finds in making children smile as well as the honour it was for him to be able to teach the people he met how to earn a living by making bracelets, thereby improving their lives through his actions.

But how could anything be wrong with any of the above? The Barbiesavior account on Instagram that was started over a month ago by two young White women, for just this reason, explains most of it. Both women, who admitted to being former ‘white saviours’ themselves before seeing the light concerning their actions, share that these deeds are, in fact, propelled by the selfish interests of individuals who possess both a detrimental and myopic view of the African continent.

The ‘white saviour complex’ revolves around two notions which make it difficult for Africa and Africans to break out of a stereotype that hinders development and advancement; that Africa is always theirs to ‘fix’ and that the poor socioeconomic state of the continent means that ANY White individual can do the job, regardless of their own socioeconomic background.

According to Tms Ruge in his article, “Your White Saviour Complex is Detrimental to My Development,” the activities of individuals who decide that it is within their capacity to visit Africa and undertake academic and socio-economic endeavours with a view to transforming the lives of the people there and their communities (usually in the form of aid) – without any professional or technical qualifications for that matter – highlight the problems of geopolitical imbalances and white privilege.

Ruge’s main argument, and that of Barbiesavior as well, is that the fact that most of these individuals who are so keen on offering aid in Africa still operate under the colonialist and paternalistic mentality that Africa’s socio-economic problems can only be solved by ‘white interference’. And thus, unqualified White individuals ‘set sail’ for Africa believing that through a sort of volunteer work or the other, they can solve the problems on the continent with their one-time visit. An endeavour that remains a lifelong project for volunteers, Black or White, who truly understand the enormity and complexities of trying to implement sustainable change.

Furthermore, while the countries these volunteers come from may already be developed, a number of the issues that they seem to assume trouble Africa alone, such as welfare and education, also need attention in their immediate environments, where they are evidently unable to operate on the same frequency as they do in Africa. The accounts of an individual anonymously named as ‘secret aid worker’ describes how Westerners in Africa, under the aid umbrella, believe that they know what’s best for Africa and Africans by virtue of their race.

Novelist, Teju Cole, opines on the issue of the white saviour industrial complex, this guilty set of volunteers and aid workers do not take into consideration the reasons why the problems that they seek to eliminate exists in the first place, however noble their intentions. Instead, they go on to further exacerbate these problems by choosing to interfere on the continent without adequate permission or consultation from the people whose lives they plan to affect.

Yes, Africa may be in dire need of aid, but as Tms Ruge, Barbiesaviour, Teju Cole and other critics of the effects of the ‘white saviour complex’ have all pointed out, it is certainly not up to the individuals who pretend on social media that they have any inkling about the socioeconomic and political issues plaguing the continent to offer such aid.