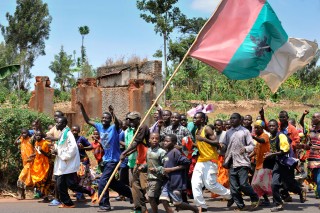 Can the international community prevent another Rwanda 94 in Burundi?

Burundi, the 11.1 million populated neighbouring country of Rwanda, is tumbling down the path of the kind of genocide which enveloped the latter 21 years ago. Many in the international community are aware of this threat but stopping it from occurring has been difficult to say the least. The African Union has approved a 5,000 strong peacekeeping force to help stem the rising reports of sectarian killings, but the government, led by Pierre Nkurunziza—whose defiance of local and international pressure to remain president is one of the major causes of the conflict—has refused such intervention and even threatened to use force against it. The region-mediated talks between Burundi’s government and the opposition have also been stalled, after Nkurunziza’s government pulled out with the excuse that it would not negotiate with the groups involved in violence. The consequence of the current impasse is an exacerbation of the tension on the ground, and violence that aid agencies say is rapidly getting out of hand.

On Friday the UN High Commission for Human Rights warned that “a complete breakdown of law and order is just around the corner” in Burundi and disclosed that it has documented 13 cases of sexual violence against women allegedly perpetrated by security forces on search and arrest operations. “All the alarm signals – including the increasing ethnic dimension of the crisis – are flashing red,” Zeid Ra’ad Al Hussein, the UN high commissioner for human rights, said. A day before, US Magazine, Time, reported a gang-rape of five women in opposition districts of Bujumbura in December by members of the security forces and the youth wing of Nkurunziza’s political party known as the Imbonerakure and likened to the Interahamwe —the Hutu militia which was at the forefront of the genocide in Rwanda. Aid group, Refugees International also released a report recently that 651 Burundian refugees in Tanzania reported sexual assault back home and that 48 percent of them were rape survivors in need of medical care. Such sexual attacks are reminiscent of the ones committed by Hutu génocidaires in Rwanda two decades ago.

Reports of killings—of members of opposition as well as government agents—are also on the rise. Nearly 450 people have been killed in Burundi since protests began in April 2015 against President Pierre Nkurunziza’s ultimately successful third term bid; 130 of them were killed in December when the security forces and members of the Imbonerakure raided civilian areas of the capital in response to rebel attacks on three military camps. Over 230 thousand people have fled to neighbouring states, mainly Tanzania and Rwanda, while the UN says it is also investigating allegations of forced disappearances and mass graves.

Burundi has a Hutu-Tutsi schism which, two decades ago, contributed to a civil war in which over three hundred thousand people were killed. Pierre Nkurunziza was one of the Hutu rebel leaders of that conflict and his decision not to leave power after two presidential terms, as stipulated by the accord which ended the civil war ten years ago, (he exploited a legal loophole that his first election was by the parliament and not in a national election) has irked the Tutsi-dominated opposition. However, Burundi’s current crisis is not just a Hutu vs. Tutsi struggle for power. Last year’s botched coup against President Nkurunziza was led by generals of Hutu extraction, so too are several leaders of the political opposition, especially his challengers in the very controversial elections which kept him in power for a third term. Nkurunziza also has Tutsi backers, among them Persille Mwidogo, an MP who recently argued that Tutsis are not being threatened, an assertion that is strongly refuted by many Tutsis.

“My point of view is that the crisis is political,” said Désiré Nimubona, a Burundian journalist who covers the conflict. However, he adds that there are people in both (the government and opposition) camps who want the crisis to be ethnic, and that is why urgent talks are need to prevent such from happening. So far, those desperately needed urgent resolutions are yet to materialise and with the continued delay rises the ethnicization of the crisis. Times Magazine said it spoke to more than 20 witnesses who say they have experienced anti-Tutsi rhetoric “in offices, schools, while in prison, or in their homes during neighbourhood raids.” Unfortunately, not everyone seems to appreciate this sense of urgency, not least, the head of the UN Peacekeeping force, Herve Ladsous, whose comment in a leaked memo—which played down the effect a peacekeeping force would have—has been criticised as lethargic. “This kind of dilly-dallying is what cost Rwanda dearly in 1994 because genocide in our part of the world was not very important”, the New Times, a Rwanda-based paper, wrote in its editorial, echoing the UN inaction which caused the failure of the international community to prevent the Rwandan genocide.

For David-Ngendo Tshimba, a PhD Fellow at Makerere Institute of Social Research in Uganda, the growing turmoil is in many ways a re-enactment of the crises that enveloped Burundi in 1965, three years after its independence, which sowed the seed of the chaos that has plagued the country since then (Burundi has had one full blown genocide, in 1972, several sectarian massacres and only recently came out of a seven-year civil war). “1965 consists of the first time in recorded history of contemporary Burundi that people lost their lives simply because of who they were ‘ethnically’ considered to be, 2015 is yet another moment in the post-colonial history of Burundi that people are losing their lives simply because of who they are ‘politically’ considered to be,” he wrote in a Social Justice Blog. “There is no higher duty of any political agency both inside and outside Burundi than to break this cycle of historical repetition,” he adds and most analysts agree. They say the most effective way to prevent Burundi from sinking into outright chaos is for the regional leaders to band together and drag Burundi’s warring factions to dialogue and for the AU and the UN Security Council to use punitive measures—such as asset freezes and travel ban—to compel their compliance. None of these have been achieved, but the sooner it is done, the faster the work of saving Burundi can begin.