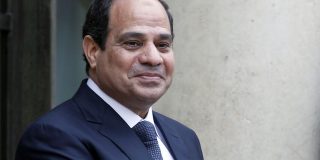 President Abdel Fattah el-Sisi has reiterated that Egypt is on the right track to revive its economy after a meltdown almost brought the country to its knees. Sisi was elected for a second term in March despite allegations that he had threatened his opponents and scared them from contesting.

On the 5th year anniversary of the mass protests that precluded a coup he coordinated against the government, Sisi acknowledged the three issues that have plagued Egypt since he became president, some through no fault of his; terrorist insurgency, political instability and an economic slowdown since 2014.

“I tell you in all objectivity, every Egyptian man and woman is entitled to feel proud for what his country has achieved in facing the three challenges, and in record time,” he said.

In 2013, Sisi led a military coup that dethroned former Egyptian president, Mohammed Morsi. He installed an interim government after dissolving the constitution and voting for another one. In 2014, he then retired as Commander-in-Chief and was elected as president with a 97 percent landslide victory.

Egypt’s economy suffered a meltdown when oil prices dipped in 2014 despite having the sixth largest proved oil reserves in Africa. Its currency lost almost 50 percent of its value after the dip, followed by a rapid inflation from 12 percent in 2014 to 33 percent in 2017. The minimum wage of $174 in 2013 is now equivalent to $68 in 2018.

Presently, Egypt is reeling from the economic requirements of a $12 billion IMF loan promised to Egypt for 3 years. The loan, which was announced in 2016, required reforms that will cut costs and boost investments in Egypt’s economy. Some of the reforms implemented by Sisi include a 60 percent subsidy cut to fuel and a 26 percent subsidy cut to electricity, implementing new taxes, and floating the Egyptian pounds.

The reforms immediately caused a decrease in remittances from Egyptians abroad, leaving many people in dire need to make ends meet. These remittances made up 12 percent of Egypt’s GDP before a decrease in the inflow of funds from relatives. However, this started to change at the beginning of 2017.

And while the currency has bounced back, remittances have increased since 2017, external reserves are at $44 billion, economic growth at 5.4 percent, and the currency float has enabled investor confidence in Egypt’s economy to increase. But the increased cost of living is causing general outrage in Egypt.

Despite Sisi’s repression of free speech and the general crackdown on dissent from any group, many Egyptians took their outrage against his speech and the subsidy costs to fuel and electricity using the hashtag #Sisi_leave. Growing resentment to leadership in Egypt could only mean one thing for a country who has had 4 different leaders since 2012.