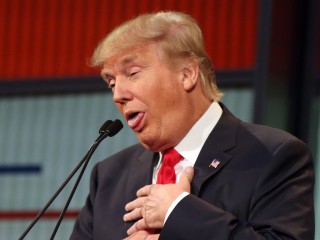 Donald Trump’s comments against Kenyans are back to haunt him

During a September 2015 campaign rally at Iowa, United States of America, popular Republican presidential candidate, Donald Trump made a derogatory comment about the Kenyan winners of the IAAF Olympics in Beijing, China, calling them cheats and con-men. They had won $7,194,000 in prize money. “Look at them, all of them, don’t you see frauds”, Trump asked.

As at the time of the statement, little did Trump know the wrath he would incur from Kenyans especially those based in the United States. Recently, Kenyan twitter started a social media campaign #SomeoneTellTrump as a way of addressing his public display of hatred towards Kenyans.

#someonetelltrump Kenyans are proud Africans, industrious and creative. Yes we like babies too. — paulnicks (@papril126) October 27, 2015

#SomeoneTellTrump that he should not go around insulting Kenyans, was it not for a kenyan father, no history would have been thru obama

#someonetelltrump that the world is watching a dictator in the making

After Trump’s derogatory comments about the Kenyan athletes and their fellow citizens, Kenyan millionaire, Gideon Munguti promised to hit back at Donald Trump for his comments. Munguti may not be a familiar name on the global sphere but he has recently placed himself under a lot of scrutiny as he lives up to his earlier threat to teach Trump a life-long lesson for his negative utterances against Kenyans.

It seems he has finally come up with a strategy that is subtle and yet bound to draw a reaction from Trumps’ haters and fans alike. The Kenyan millionaire has already begun mass producing toilet paper with Donald Trump’s face all over it. As shown below, Trump is wearing an ugly facial expressions, one of his many iconic expressions which have earned him a spot in funny memes currently circling the internet. 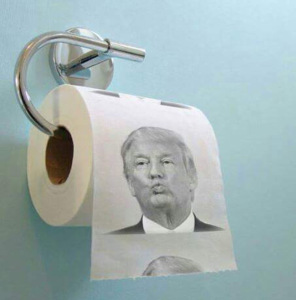 In a conversation with Politica, Munguti said “Trump deserves to wipe all shit and escort it to destination”. Critics have accused Trump of practicing the politics of division, even at that, will this revenge tactic by Mugunti create any sort of remorse from Trump? It is unlikely as the Republican presidential candidate has a reputation for never really retracing his steps on the controversial comments he makes, except for that one time in September 2015, when he said he never referenced fellow presidential hopeful, Carly Fiorina’s face in his comments about her looks, but was referencing her persona.

Making brash comments seem to be his forte. Just a few hours ago, Donald Trump made a comment about fellow Republican presidential candidate, Ben Carson, not having the experience to be president. “It’s not his thing. He doesn’t have the temperament for it”, says Trump.