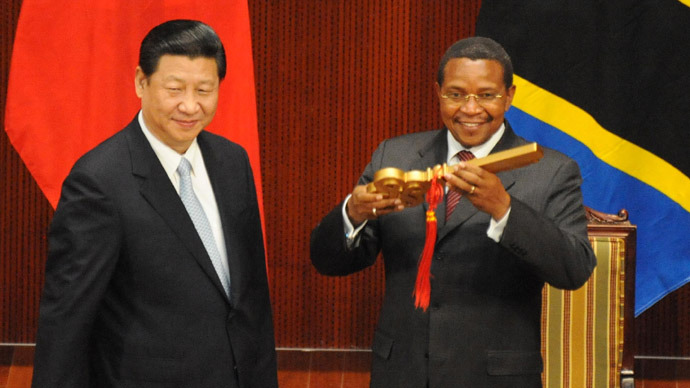 China’s total direct investment in Tanzania soared from $700 million in 2011 to $2.1 billion last year, turning the world’s second biggest economy into the biggest foreign investor in the east African country, it has emerged.

This investment has not only boosted economic growth of Tanzania but has also created more than 150 000 direct jobs, according to the research house.

“Bilateral trade between China and Tanzania has also soared in the same period, reaching over $2.5 billion by the end of 2012,” Imara said in its latest report, citing official data.

Lately, China and Tanzania have taken on up to 19 projects worth billions of dollars. Some of these projects have been financially backed by the Chinese state-owned Exim Bank to the tune of $10 billion.

One of these deals involves the construction of the multi billion-dollar port at Bagamoyo, northwest of Dar es Salaam, the capital of Tanzania.

Set to be the largest and most modern port in Africa, the harbour is expected to be in operation by 2017. It will handle 20 times more cargo than the Dar es Salaam port, which is Tanzania’s current major import and export gateway in East Africa.

China-state-run-firm, Merchants Holdings, has also won a deal to construct a 34km road between Bagamoyo and Mlandizi, linking the port to Tanzania’s internal rail network and the Tanzania-Zambia Railway.

Additionally, a Chinese $1.2 billion soft loan transaction for a 523km line connecting Dar es Salaam and the Mtwara gas field was endorsed in September 2012 between Tanzanian government and the Exim Bank.

Between 2001 and 2011, mineral-rich Tanzania received funding worth $ 4.6 billion from the Chinese.

According to Imara, China’s state-owned Sichuan Hongda Group got into a $3bn partnership with Tanzania’s National Development Corporation to develop a major iron-coal mine.