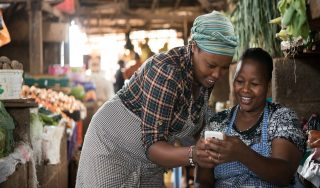 Can women lead the gig economy in Africa?

Between 2 a.m. to 6 a.m. every weekday, Morenike Ogunjobi, 26, prepares a variety of delicacies in her home kitchen in Lagos, Nigeria. Whether she’s making stir-fried spaghetti, yam porridge, or native rice, Morenike thoroughly garnishes her meals with fried plantain, fish and tender meats. But her customers are not within sight. She serves these meals in transparent food packs and wraps them in her branded polythene bags. Before 7 a.m., a dispatch rider is ready to collect these meals and deliver pre-ordered homemade breakfast to customers across Lagos.

Women like Morenike — fondly known as Mummy Mo — are leveraging e-commerce through social media to run their businesses. They also leverage platforms such as Food Sasa to take vending gigs. Food vendors have become a part of the new digital informal economy and are cashing in on it. But it is not just food vendors. Now more than ever, women in Africa are using online platforms as a critical source of income. Africa’s e-commerce giant Jumia recently announced that 51 per cent of the vendors on its platform are women and represented 33 per cent of the total value of merchandise sold between 2019 and 2020. IFC also reports that women dominate the fashion category of African e-commerce.

Research shows there are more women-owned businesses on social media than men in several African countries. Women have also joined ride-hailing platforms such as Uber and Bolt as drivers. And many young women on the continent are providing professional services on freelancing platforms and on-demand labour platforms.

The International Labour Organisation (ILO) classifies gig jobs as temporary employment with predetermined termination dates. They could be fixed-term, task-based contracts, seasonal, or casual jobs. It also says that women make four out of every ten workers online and on web-based platforms globally.

Across Africa, the gig economy platforms take different forms. Kobo360 and Lori Systems, for example, have each raised at least $37 million to connect people with third-party truck drivers on-demand. Lori Systems estimates that the African haulage market is worth $180 billion yearly.

There’s also SweepSouth, which has raised $6 million from investors, and Eden Life, which provide on-demand home cleaning services, among many other things, in South Africa and Nigeria. But there are also other platforms for professional services like accounting, graphics design, programming, content writing, among others. One notable name is Andela, the Mark Zuckerberg-funded company which recently became a unicorn.

Around 85 per cent of working women in Uganda work in the informal sector, which accounts for 75 per cent of the country’s total employment. A 2011 report found that activities such as carpentry are considered unsuitable and too demanding for women. As a result, they have often settled for less physically demanding, relatively low-return jobs, such as food preparation or selling in markets.

The gig economy is already a big part of Africa’s future of work. Its teeming young population is adopting gigs to put their skills to use. But it’s also possible that women will lead Africa’s gig economy. In Nigeria, women already represent 65 per cent of skilled professionals. Many other African countries also have women dominating their skilled labour force by numbers. But Africa’s peculiarities might play an important role in determining their dominance in the gig economy.

Africa prides itself on adherence to diverse cultural affinity and traditional belief systems. These belief systems also include gender roles in families and society. For instance, married women are expected to be more present for domestic duties, including looking after their children. Even though women participate more in the corporate and business world today, these beliefs still influence their work habits. Research shows that women generally struggle more with work-life balance than men.

Growing in the corporate sector requires a great deal of time investment. Furthermore, there is little to no time flexibility in 9 to 5 jobs. Consequently, women are likely to seek more flexible alternatives to be present for their families. Gigs, therefore, become more attractive to the traditional African woman as they get to choose their working hours themselves.

Africa leads the world in terms of numbers of women business owners. African women were even proven to be more likely to be entrepreneurs than men. According to the World Bank, 58 per cent of all MSMEs in Africa are women-owned. But one of the major reasons women move to entrepreneurship is unemployment.

According to the National Bureau of Statistics, women made up only 38 per cent of civil servants in Nigeria from 2010 to 2015. In South Africa, almost one out of three (30.5 per cent) women are unemployed. So it’s not simply that African women love doing business. It’s just hard for a lot of them to get jobs. Although many women own businesses, the World Bank says that their businesses are 34 per cent less profitable than men-owned businesses. So it’s safe to say that many of them do not enjoy running businesses. But since the gig economy is open to all, it could begin to receive an influx of women.

It’s not all roses

The gig economy promises many opportunities to women, especially because of its low-entry barrier. However, there are hurdles to cross, one of them being safety. A study of women ride-hailing drivers in South Africa, Mexico, Egypt, Indonesia, and the UK found that the majority (57 per cent) prefer not to drive outside of daylight hours because of security concerns. In South Africa, 51 per cent of female drivers said security is the top reason for not driving more hours.

Also, gigs don’t completely erase gender inequality in Africa. Despite the large numbers of women leaning into the gig economy in developing countries, only two out of ten workers on online, web-based platforms are women. According to the World Bank, this is partly because there are still more uneducated women than men on the continent. Nevertheless, Africa’s future of work is prospective. Its growing internet economy provides opportunities for women and physically challenged people who previously had difficulties getting jobs.