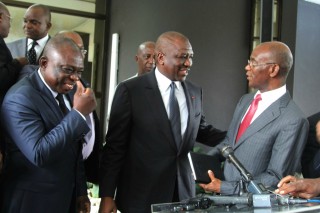 Following the presidential elections in Cote d’Ivoire and the re-election of President Ouattara, we had the opportunity to sit down with one of the key figures of the past elections, Hamed Bakayoko. Originally a journalist, he was made the CEO of Radio Nostalgie Afrique in 2000 before his subsequent appointment as the Minister of the New Technologies of Information and Communication in 2003. He held this position until 2011 when he was appointed Minister of State, Minister of Interior and Security of the Republic of Cote d’Ivoire which has been his office since. He has been a key element in the re-establishment of security in Cote d’Ivoire, helping the country get back on track and inspiring confidence within the local population and foreign investors. He is also one of the key figures of the RDR, the political party of President Ouattara in which he played a major role for its re-election.

Franck Kié (FK): Can you please give us a brief review of the president’s last mandate and the perspectives for the upcoming one?

Hamed Bakayoko (HB): So, if we want to review and assess the first mandate of President Ouattara, it has mainly been marked by getting the country back on track after the post electoral crisis from the election in 2010. We, had to quickly inspire trust again, as trust is the key element for investors .This trust could only come back through security and peace so we worked a lot with the National Security Council (CNS), who has implemented and tracked the evolution of the security policy that yielded good results. We also had to work on reconciliation as the social fabric was broken following the post electoral crisis, making sure to engage the opposition in political dialogue.

Then we had to get the economy back on track and President Ouattara created policies to make major investments in infrastructure, education, health and transportation which lead to further development of the country. Today, these investments are working favourably and, there are figures and statistics to back it up. Today, we have full planes coming back to Abidjan with foreign investors who have real intentions to invest, which shows the Ivorian population that we are going in the right direction. The Henri Konan Bridge is an example of the type of projects that can inspire pride in the population, improving their lifestyle and the mindset of most skeptics.

The city of Jacqueville, for example, has been waiting for almost forty years for a bridge, which has now been completed, attracting major investments to the area. President Ouattara has done these things, allowing them to coincide with the end of his first mandate, which is extraordinary. So now that Cote d’Ivoire is back on track, today, anything is possible. Now we plan to accelerate the consolidation of peace and increase investment so we can knock on the door of what we call “emergence”.

FK: What we should expect from your department, specifically, over the next 5 years, considering the steps you have already been taken over the past 5 years to bring peace and security back to the country.

HB: The ultimate goal of security is freedom and we talk about freedom in the large sense. If we take a look at developed countries such as the United States, there are people who truly feel free and protected by the law at the same time. Regardless of a person’s social status, they believe the law is the same for everybody and that the political system is here to protect them. That is the level we aim to get to.

If we manage to attain this, we will be at the step before reaching emergence that I have coined the “no-turning back point.” This is essentially when a country reaches a particular level of development where they do not have to focus on certain security issues, such as foiling the plans of a suspected military coup. We used to look at security at a global level but as of today, I have a progress report that shows me the most criminogenic areas and I analyze how to empower the police force and increase their presence in the affected regions. But even if we reach a high level of security, we always have to be vigilant and maintain our security plan at all times to reassure the population because we are never truly safe from a crime that can inspire feelings of insecurity among the population. It could be a woman who has been raped or a great heist or an act of terrorism like what ISIS attempted to do in France. So we go further in our objective to create a state where the people believe in their freedom and the justice system, because it is useless to have security if justice does not follow suit.

FK: Last but not least, we know that you are very involved in helping the Ivorian youth, so what advice can you give to them and other young people across Africa to succeed?

HB: I would ask the youth to get more involved in the future of their country because it’s theirs and nobody else will do it for them. They have a chance of doing better than previous generations as they have been raised in a time where the greatest wealth is knowledge and sharing the knowledge. We live in a globalised world now and this is a great chance for Africa to shine even brighter, so the youth must be aware of this. My conviction is that if the youth play their part, Africa will become the future of the world because all the developed countries have a low margin of growth whereas we still have a huge margin. So if we have a body of young people that realizes its potential, I think that we will be able to create an African continent that is able to make others see it in a positive light.