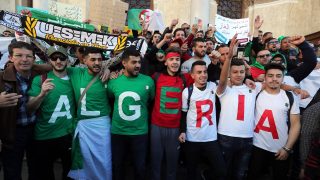 Algeria will not be approaching either the World Bank, the International Monetary Fund or other financial institutions for loans to cushion against the effects of the COVID-19 outbreak, President Abdelmadjid Tebboune has said, despite facing financial woes caused by the pandemic and a collapse in global oil prices.

The unprecedented crash in oil prices – caused by plunging demand due to lockdowns meant to curb the spread of the virus and worsened by a price war between major producers Russia and Saudi Arabia – has severely affected the North African nation, which generates over 90 percent of its export receipts from oil production.

Prior to this year’s crisis, foreign exchange reserves had fallen drastically from $180 billion in 2014 to close to $62 billion at the end of 2019. Confronted with a looming financial crisis and broader economic fallout from the COVID-19 pandemic, the president said Algeria would prefer to borrow from its own citizens, rather than the IMF or the World Bank.

While many similar resource-dependent countries across Africa have since turned to international lenders for relief funds – governments in the region have secured around $10 billion combined from the Fund to tackle the pandemic – Algeria’s decision is due to the negative experience the country had when it fell into heavy debt with the IMF in the 1990s and meant to protect its national sovereignty, the president said.

“Accumulating debt harms national sovereignty,” said Tebboune in a recent meeting with Algerian media broadcast. “I would rather borrow from Algerians than from the IMF or other foreign banks” because “when we borrow from foreign banks, we can’t discuss Palestine or Western Sahara”, two very important and sensitive issues for Algiers.

Tebboune also pointed out that the informal sector, which encompasses players outside the traditional financial system, represents “between 6 trillion and 10 trillion Tunisian dinars (between $46.16 billion and around $76.98 billion)”, guaranteeing that the owners of the funds would have “every assurance and incentive […] to contribute to the national economy.”

The leader then revealed that certain “friendly” nations – without specifying which – had offered Algeria loans, but that he had declined them for the time being. “In dealing with the coronavirus crisis, our strength was that we weren’t in debt”, he added. The country would also not resort to printing currency, the president said, as he thinks doing so could ultimately lead to skyrocketing inflation.

Algeria is expected to go into recession this year, with its economy contracting 5.2 percent, and to have one of the largest budget deficits in the region due to the collapse in oil prices and the novel coronavirus, according to IMF projections.