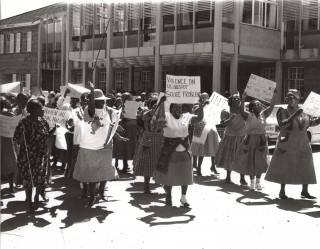 Feminism in Africa has evolved through time. In the nineteenth century, conscious traces of the ideology were found in the activities of the women living in pre-modern and colonial African societies. The twentieth century, however, brought a distinct wave of African women who fell well within the definitions of the controversial word. Women like Margaret Ekpo, Huda Sharaawi, Adelaide Casely-Hayford and Funmilayo Ransome Kuti all proved that feminism was never a borrowed ‘culture’, but simply a borrowed word.

While the world was busy trying to decide whether or not African women were capable of being feminists, these women were setting examples by sacrificing significant parts of their lives for a better, more egalitarian society. Even before the efforts of these women, African societies have linked feminist activities on the continent to politics and academics based on the participation of women in liberation struggles. Although they are remembered in different ways, many are yet to be awarded with the prestigious post-mortem statuses that they deserve.

According to Amina Mama, a renowned African contemporary figure, postcolonial feminism owes part of its current strength to African thinkers and the following women are good examples of why this is the case.

Adelaide Smith Casely-Hayford (1868 – 1960) was a feminist from Sierra Leone whose major activities revolved around educating girls, both at home and abroad. She is popularly referred to as the “Victorian feminist” because of the middle class English ideology she embraced involving the use of education as a tool to prepare women and girls for domestic roles in their future homes. Casely-Hayford was also well travelled and this exposed her to racial hierarchies and black female labour exploitation around the world.

Margaret Ekpo (1914 – 2006) is a remarkable Nigerian political legend and women’s rights activist. Her husband’s inability to attend a meeting concerning the treatment of doctors and civil servants at the hands of colonial administrators marked the beginning of her historic journey into the world of politics and activism. Among her other numerous achievements, she was a key organiser of the Aba Market Women’s Association, stemming from her need to have other women representatives in political meetings, besides herself. Her relationship with fellow feminists and activists Funmilayo Ransome-Kuti and Hajiya Gambo Sawaba saw the social and political contributions of women in Nigeria change tremendously.

Charlotte Maxeke (1874 – 1939) is honoured as the ‘Mother of Black Freedom in South Africa’. She was an activist who fought for the freedom of women from exploitative conditions and engaged in many multi-racial equality movements. She is famous for writing about the socio-political conditions of the women and for addressing the “woman question”. She founded the Bantu Women’s League of the South African Native National Congress (SANNC) in 1918 and was popular for leading revolutionary protests.

Hajiya Gambo Sawaba (1933 – 2011) changed the status quo in both Northern Nigeria and Nigeria as a whole in the 1950s with her fearless approach to matters concerning politics, freedom, liberation, and corruption. Her fearless participation in politics led to her being imprisoned over a dozen times as well as being exiled from Kano by the Emir at one time.

Huda Shaarawi (1879 – 1947) is considered the founder of the “Women’s Movement” in Egypt, based on her dedication to women’s rights in the country. She is also famous for being a nationalist, committed to equality and increased education opportunities for women and girls and establishing various organisations to tackle these issues. In 1923, Sharaawi caused a huge stir at a Cairo station, by removing her veil on her way home from a meeting of the International Woman Suffrage Alliance in Rome and she is most famously remembered for this. Up until the time of her death, she was president of the Egyptian Feminist Union and was also the founding president of the Arab Feminist Union in 1945.

Lilian Masediba Ngoyi (“Ma Ngoyi”, 1911 – 1980) was famous for her role during the apartheid era in South Africa and for the energy she brought into her public speaking and activism. She is an amazing example of a fighter, as the nature of her protests led her to get arrested several times and even being placed in solitary confinement for up to 71 days. During her life, she was president of both the African National Congress Women’s League and the Federation of South African Women.

Nontsikelelo Albertina Sisulu (1918 –  2011) is remembered as a selfless, courageous and principled woman, whose exemplary life paved the way to the end of the apartheid struggles in South Africa and her dedication to women’s rights, unity, and education. For her activism, she was elected to the South African Parliament, following Nelson Mandela’s election as the first black president of the country.

Numerous other women, including Nawal El Saadawi, Wangari Maathai, Funmilayo Ransome-Kuti, and Ama Ata Aidoo have also stood up for women’s rights in different parts of Africa, serving as trendsetters and trailblazers for the recognition and rise of feminsim on the continent today, and African history is proud to have them and their unforgettable contributions to the development to the fight for social and political equality in both past and contemporary times.