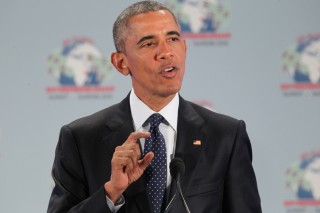 US President Barack Obama says African countries have the opportunity to skip the dependency on fossil fuel and other forms of dirty energy, and move straight to clean and renewable energy. Speaking during a visit to the Power Africa Innovation Fair in Nairobi this morning, Obama said the growing use of environment friendly energy sources, such as solar power, to generate electricity tells of a bright future for the continent. “This mix of traditional products combined with these innovative ways of both producing energy and distributing it is why we think this is going to be such a promising initiative over the next several years,” he said.

Obama also defended Power Africa against criticisms of ineffectiveness in solving Africa’s power challenge. “Our Power Africa initiative has been leveraging private capital to invest in electrification all across the continent. And our preliminary goal was 10,000 megawatts; now we’re looking at 30,000 megawatts, and we’re well on our way,” he enthused. “What’s happening is, is that financing, the transactions have been completed, plans are underway, and the work is being done — now we’re going to start seeing thousands, then ten of thousands, then hundreds of thousands, and then ultimately millions of households all across this continent with electrical power that can boost productivity and economic growth all across the continent.”

Obama explained that some of the power will be generated by very traditional power plants and the traditional financing and large-scale capital, but added that “there are going to be a lot of ways of generating power and a lot of different distribution mechanisms.” This, he said, will make the realization of power in the continent a lot quicker.

Obama’s comments come after he described Africa as the continent “on the move” during his remarks at the Global Entrepreneurship Summit this morning. “I wanted to be here because Africa is on the move,” he said to a resounding applause from the audience among which were business leaders from 120 countries. “Africa is one of the fastest-growing regions of the world.  People are being lifted out of poverty.  Incomes are up.  The middle class is growing.  And young people like you are harnessing technology to change the way Africa is doing business, as President Kenyatta alluded to.  And that creates incredible opportunities for Africans and for the world.  It means more growth and trade that creates jobs in all our countries.  It’s good for all of us.”

“This continent needs to be a future hub of global growth, not just African growth,” Obama said to more applause. He described Kenya as the leading the way and setting an example. “Today, Kenya is the largest economy in East Africa.  High-speed broadband and mobile connectivity are on the rise, unleashing the entrepreneurial spirit of even more Kenyans.  Every day around the world, millions of people send and save money with M-Pesa — and it’s a great idea that started here in Kenya.”