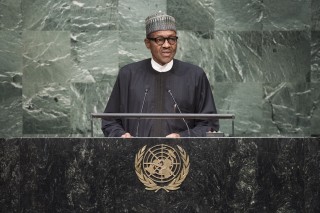 President Muhammadu Buhari addressed the United Nations General Assembly (UNGA) for the second time yesterday. The 71st session of the UNGA began last week with several Heads of State in attendance. The Nigerian president took the opportunity to tell other world leaders what he is doing to help the realization of the UN’s Sustainable Development Goals (SDG).

The Nigerian government has embarked on reforms to diversify the economy

Buhari said his government is putting up reforms aimed at diversifying the country’s economy. Nigeria, whose main source of revenue is from the sale of crude, has been seriously affected by the global economic downturn. The president listed mining, agriculture, industrialization, infrastructure development and the creation of the enabling environment for Foreign Direct Investment as its focus.

He also said the government is “taking measures to reduce the cost of governance and increase expenditure on infrastructure and ensure environmental best practices” in a bid to stimulate the economy, restore growth and accelerate recovery. Nigeria is currently in a recession after it experienced a negative GDP growth in Q2.

Anti-corruption crusade in Nigeria has started to yield positive results

President Buhari told the General Assembly that the anti-corruption drive in Nigeria has started to yield positive results, including the recovery of stolen assets. One of the major strides of the present Nigerian government has been in the anti-corruption fight. The government, at several times, made announcements of loots that have been recovered, both home and abroad.

He also advocated for the speedy and unconditional return of stolen public assets stashed in foreign countries. It would be recalled that Switzerland told the Nigerian government it must allow the World Bank monitor the Abacha loot it would repatriate.

The Nigerian president said his government is convinced that transparent governance is an imperative for resource-rich developing countries like ours. Nigeria is one of the countries that are members of the Extractive Industries Transparency Initiative (EITI), a global coalition which promotes transparency and accountability in the management of revenues from the oil, gas, and solid minerals sectors. “Through the work that our national chapter of EITI has done over the years, it is clear that our faith is not misplaced. The National EITI has been empowering citizens with the critical information they can use to hold government and other players in the extractive industries to account and make recommendations that drive reforms in these strategic sectors of our national life,” Buhari said.

Buhari called the attention of world leaders to the drying Lake Chad as a result of climate change. President Buhari said “the cost of replenishing the lake has been put at 14 billion US Dollars under a five-year plan” and it should be a global concern.

The Nigerian leader also said the country is determined to implement the strategies of the UN’s Intended Nationally Determined Contributions (INDCs). Stressing the country’s commitment to sustainability, President Buhari informed the UNGA that “Nigeria has launched the cleanup of Ogoniland in Nigeria’s Niger Delta, based on the 2011 Environmental Assessment of the area by the United Nations Environment Programme.” According to him, multinational oil companies operating in the oil region will “contribute to the cleaning up of the environment degraded as a result of their activities and operations.”

Nigeria has combated terrorism in conformity with international best practices

President Buhari said the resolve to defeat the Boko Haram insurgents in the country’s north-east has made remarkable progress. The president said the capacity of the terrorist group to carry out the organized attack has been “severely degraded”.

Quashing claims that the Nigerian Army has repeatedly violated human rights in its operations, Buhari insisted that “Nigeria has continued to combat terrorism based on the established rules of engagement and in conformity with international best practices. I also wish to restate the assurance that the Federal Government of Nigeria is employing all our judicial tools to investigate and treat reported cases of human rights violations,” the President said.

The United Nations Security Council has to be reformed

The call for the reform of the United Nations Security Council has once again been made by Nigeria. President Buhari told the UNGA that the reform is necessary “to reflect equitable and fair representation and greater transparency, legitimacy, and inclusiveness in its decision making. Africa should be adequately represented on the United Nations Security Council in the permanent member category. In this regard, Nigeria stands ready to serve Africa and the world on a reformed security council to advance international peace and security.”