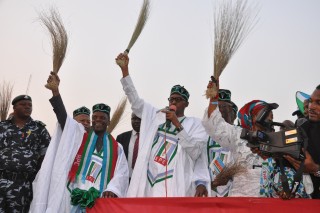 On Friday the 29th of May, General Muhammadu Buhari was sworn in as the fourth president of Nigeria’s fourth republic. Nigerians and the rest of the world watched as the man, on who lays the burden of change, pledged his absolute service to his country. In his inaugural speech, President Buhari vowed to address a number of issues, from insecurity, corruption and unemployment, “head on.”

Over the past decade, Nigeria has grown more insecure, largely due to, but not restricted to ethno-religious crisis and Boko Haram’s insurgency in the north. While the Islamic terrorist group has run rampage in the north, killing, kidnapping, maiming and displacing civilians, the south has also been plagued by constant kidnapping.

With daily reports of bomb blasts and kidnapping by the media, Nigerians now live in constant apprehension. The issue of insecurity is considered to be the biggest failure of the former administration.
In his inaugural speech, President Buhari described insecurity as the “the most immediate” issue to be dealt with. He reminded citizens of the recent progress made by the security forces of the country, and also emphasized that efforts will be intensified to see the rescue of the Chibok girls and every other person under the captivity of Boko Haram.

Nigeria faces quite a number of challenges, and corruption maintains a top spot on the list. The 2014 Corruption Perception index of  Transparency International, revealed Nigeria as one of the countries mostly perceived as corrupt, and rightly so.

A poor education system, fake drugs, and rigged elections are just a few consequences of corruption in Nigeria, a pandemic that has remained unresolved for decades. From bribery in both the public and private sector, internet fraud among the youths (yahoo scams), to embezzlement by government officials, extortion by members of the armed forces, favouritism and nepotism; Nigeria serves a breeding ground for all forms of corruption.

During his campaign, tackling corruption was President Buhari’s focus, as he promised to rid the country of all corrupt practices. “My fear is that if we don’t kill corruption in Nigeria, corruption will kill us. So, the choice before us is to resolve to kill corruption and free our country from the firm grip of corrupt men and women,” he said at a presidential rally in Port-harcourt.

His administration has already started taking measures towards corruption eradication as Nigeria’s Anti-Corruption Agency recently arrested senior officials of the Central Bank of Nigeria (CBN) and over ten others from commercial banks across the country for currency fraud. Also, Nigerian citizens are told to report hiked fuel sales at neighbouring stations around them to the Department of Petroleum Resources. The country clearly has renewed hope in the president, a man who has a strong reputation for being incorruptible.

Economic activities in Nigeria’s major cities recently came to a halt following a strike by oil marketers and transporters Endless queues formed at filling stations, the price of transportation doubled, workers and students were forced to remain at home, and banks shut down.

Despite being blessed with the resource of oil, and the existence of five refineries in the country, Nigeria has continued to rely on imported petroleum products, causing its citizens to be at the mercy of oil marketers as petroleum products are subsidised. Trillions of naira that could have been diverted into other sectors of the economy has been wasted on subsidy.

As if by plan, while citizens decried the scarcity of fuel, there was no power in these cities as well, making living conditions almost unbearable. As the president rightly put it in his speech, “it is a national shame that an economy of 180 million generates only 4,000MW, and distributes even less. Continuous tinkering with the structures of power supply and distribution and close on $20b expanded since 1999 have only brought darkness, frustration, misery, and resignation among Nigerians.” While he stated this, the inauguration was being powered by generators.

Though a recent report by the National Bureau of Statistics says unemployment in Nigeria is down to 6.4 per cent from 28 per cent, it still remains one of the major challenges faced by the country. Years of corruption, mismanagement of finance and resources have hindered the country’s economic growth, which adversely results in unemployment.

The president on Friday vowed to attack the problem of unemployment “through the revival of agriculture, solid minerals mining as well as credits to small and medium size businesses to kick – start these enterprises.”

The present state of Nigeria’s economy is surprising given the country’s natural and human resources. With unpaid salaries, increase in the price of goods and services, and a consistent drop in oil price, Nigerians, no doubt, entered 2015 frightened.

Though the economy has been growing at a decent clip over the past few years, a recent global dip in oil prices is beginning to take its toll. This has led to a dip in foreign reserves, and a devaluation of the currency.

During his campaign earlier in the year, the president had pledged to strengthen the country’s weak economy. In a meeting at the Lagos State Government House, tagged ‘GMB means business’, the president had promised to design practical economic policies suitable to promote Nigeria’s prosperity and the creation of jobs, giving a breakdown of his plans. “We shall quickly examine the best way to revive major industries and accelerate the revival and development of our railways, roads and general infrastructure,” he stated in his inaugural speech.