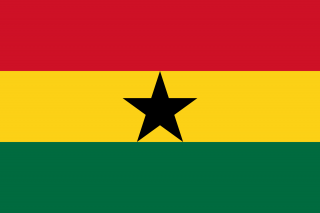 What happened in Ghana in 2015

Ghana definitely experienced an interesting year in 2015, replete with ups and downs which was reflected through all aspects of its economy. Yesterday, Ghanaweb.com listed the West African nation among the worst performing African countries of 2015. From a near-economic crisis, corruption charges and environmental disasters, to strides in innovation, business and agriculture, Ghana was a regular fixture in African and global news all year long. Its entertainment and political sectors were also not without eventful moments.

While there are innumerable options that portray Ghana’s exciting past year to pick from, Ventures Africa brings you a list of ten memorable things that happened in the country in 2015. 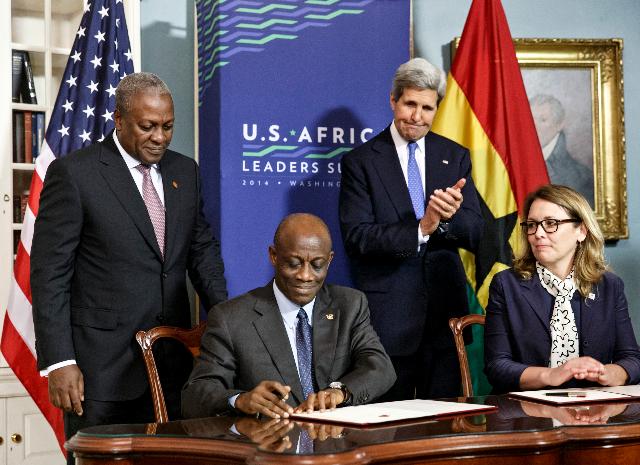 The International Monetary Fund (IMF) intervened in Ghana’s struggle with its economy by lending it $933 million to turn things around. Following an increasing government debt, reduced export revenue and a low currency performance, amongst other economic and infrastructural challenges, Ghanaian President, John Dramani Mahama, was left with no choice but to request help from the financial organisation.

In granting the loan, however, the IMF outlined conditions to be met by the Ghanaian government, including addressing its wide fiscal deficit issues and improving its public sector wages. The IMF loan is to be paid over the course of ten years and comes at zero percent interest rate.

May: Ghana – Nigeria engage in Twitter battle over Jollof Rice

Although it is a common sight for Ghana and Nigeria to get caught up in different tweet-fights spanning various subjects, an epic one in 2015 was the battle to determine which country cooks a better version of Jollof Rice; a popular West African delicacy originally from Senegal. Twitter users from both countries took to social media to claim superiority in preparing the delicacy through mocking and provocative tweets.

@UcheIsClown if you go to a party n they serve u #ghanajollof its not a good omen o.

When you eat Nigerian Jollof and forget who you are #jollofbattle #GhanaJollof is the truth… https://t.co/86ZTGk9oIr — Nana Kwadwo Boateng (@Likeabite) December 12, 2015

Other Twitter fights between Ghana and Nigeria in the past involved arguments over skin complexions, dance styles, sports and movie production quality.

What Nigerians wear on their way to #NigeriaVsGhana rap battle. pic.twitter.com/CjCaX7vcYK 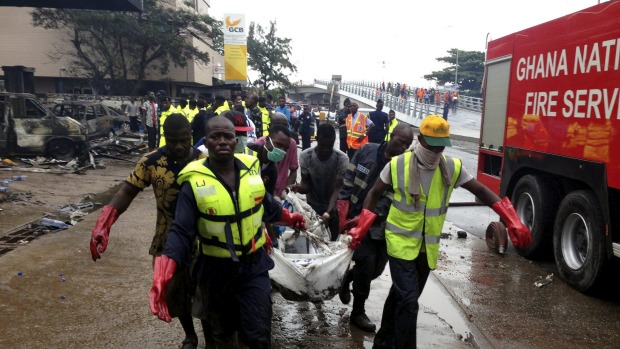 On June 3, about 200 victims lost their lives to a fire outbreak at the GOIL Filling Station in Kwame Nkrumah Circle, Accra. Loosely closed fuel valves and a fire 100 metres away from the station were pinpointed as the culprits, along with the flooding problem that the city was going through. A heavy downpour on the day led people to take shelter at the station. As the water level rose, an oily substance was noticed, but it was too late to avert the impending disaster.

Presidents Muhammadu Buhari (Nigeria) and Vladimir Putin (Russia) commiserated with the families of the victims, and extended their well-wishes to those that were injured and still in recovery. 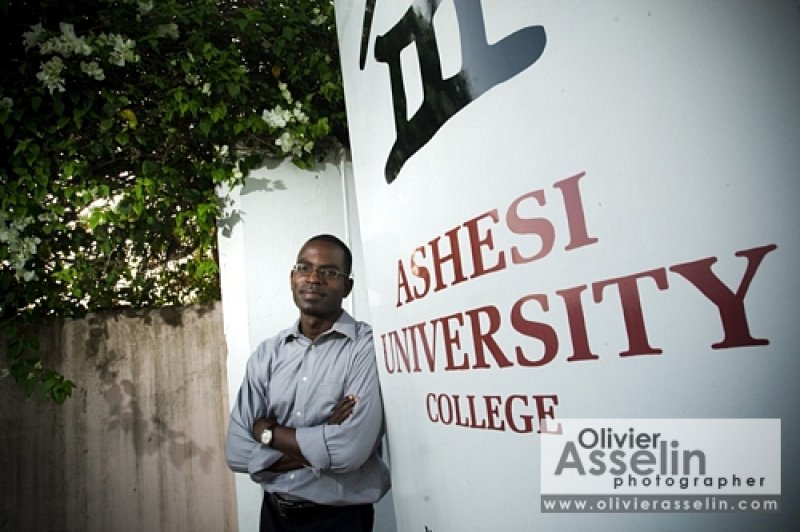 In 1997, Ghanaian engineer Patrick Awuah quit his job at technology giant company, Microsoft, to return home and establish the Asheshi University, a private school for liberal arts. The school accepted its first set of students in 2002. Over a decade later, the John D. and Catherine T. MacArthur Foundation awarded him $625,000 in what is considered to be one of the highest honours in the world.

Awuah always aspired to contribute to his homeland by honing minds and producing exemplary citizens who would become future leaders of Ghana. However, funding his life dream was a daunting task. Asheshi, which means “beginning” in a native Ghanaian language, is a product of fund-raising and financial support from Awuah’s loved ones, thus making the grant hugely deserved. This has not stopped the institution from providing scholarship programmes to the less privileged.

Since its inception, Asheshi has produced over 700 graduates and hopes to do more in the future in order to bless Africa with bright minds that could influence positive change on the continent.

September: Chameleon, an expose on the corrupt practices in Ghana’s judicial system, as documented by Anas Aremeyaw Anas, is publicly screened 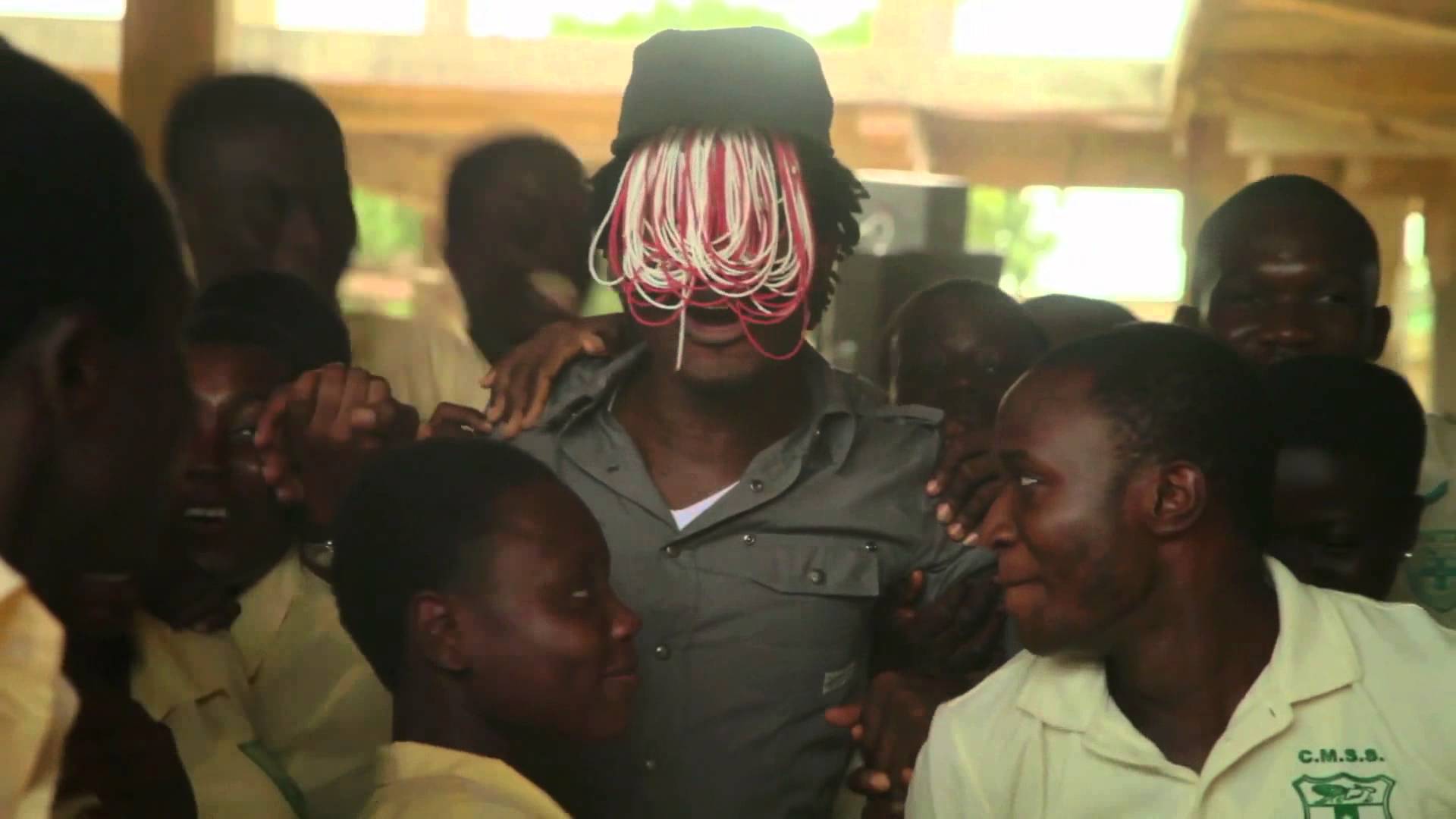 Since 2013, Anas Aremeyaw Anas, an investigative journalist who famously goes undercover with the help of several disguises, had been working on exposing over 34 Ghanaian judges for accepting bribes. The documentary, titled Chameleon chronicles the life and work of Anas which premiered in Ghana amidst a significant level of anticipation.

In October, 32 of the accused judges were indicted following the release of the film while 22 of them were sacked in December. Anas was awarded for his selfless contribution to Ghana’s development at the 2015 edition of the Millennium Excellence Awards which held at the Kwame Nkrumah University of Science and Technology.

President John Dramani Mahama placed a ban on the country’s public officials which prevents them from flying first class whenever they travel. The ban was as a result of the government’s efforts to reduce wasteful expenditures, as it implements the IMF financial aid to salvage its economy. In addition, ministers were adviced to avoid unnecessary trips abroad and Finance Minister Seth Terkper hinted at possible punitive measures for violators.

Mary Addah, Programmes Manager at the Ghana Integrity Initiative (GII) commended the president’s initiative and asked that his office ensure that it receives strict compliance. She added that the GII would be watching to see if the government lives up to its decision. 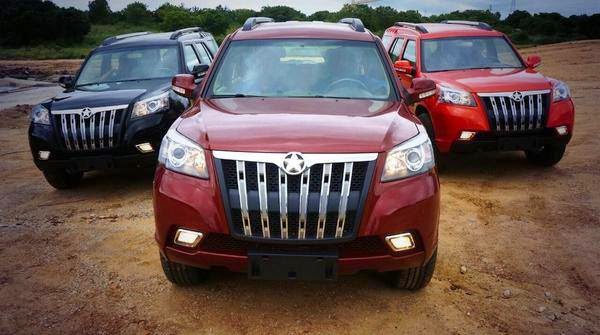 The Katanka group is finally ready to stake its claim in the global automobile manufacturing industry with the commencement of sales of its locally made cars. On November 27, the company unveiled five new vehicle ranges, all of which were commissioned by Ghana’s Road Safety Commission. Even the cheapest of any of the cars costs around $20,000, the general reception has been largely encouraging.

According to Kwadwo Safo Jnr., the Chief Executive Officer of Katanka Group, the biggest challenge facing the company is getting people to have faith in the products. However, he is convinced that in time Katanka Automobiles will overcome whatever challenges they have left and be a force to be reckoned with worldwide. Katanka Automobiles is owned by Apostle Dr. Kwado Safo Katanka, a renowned science genius and inventor. 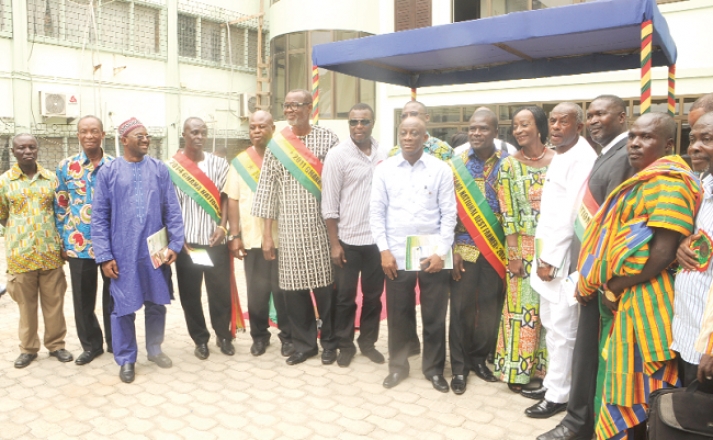 Farmers in Ghana reaped the rewards of their commitment to agriculture on December 4, when farmers in different districts and regions in the country were awarded prizes in celebration of National Farmers’ Day. Under the theme “Transform Ghana, Invest in Agriculture”, spraying machines, cutlasses, watering cans, wheelbarrows, boots and other helpful tools were given out to outstanding individuals in the profession.

Baba Paskem, a 53-year-old visually impaired farmer, was among the 80 people in his East Maprusi District to receive an award from Vice President Paa Kwesi Amissah-Arthur, who was represented by Council of State member, Adenze Kanga. A total of 600,000 cocoa seedlings and a large amount of fertilisers were presented to farmers in the Tano South District to encourage their profession, as well as help improve the agriculture sector of the country. 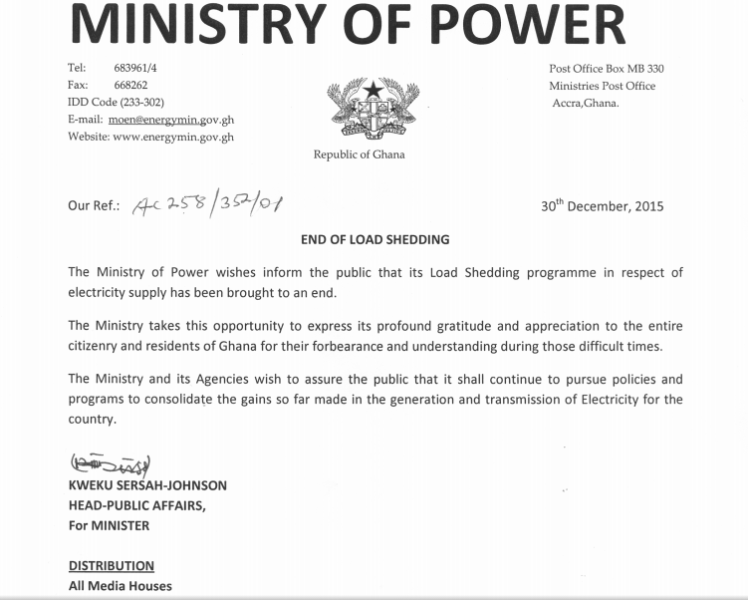 Kweku Sersah-Johnson, Head of Public Affairs for the Ministry of Power, informed the general public that their electricity woes in respect of the load shedding programme were over. The ministry further stated that it would continue to pursue policies and programmes that aided electricity generation and transmission.

Over the last two years, Ghana’s electricity troubles witnessed a significant increase which saw businesses shut down and citizens lose their jobs. Following the announcement, Dr. Kwabena Donkor, Power Minister, kept to his promise and resigned from office due to his inability to handle the country’s electricity crisis for years now. 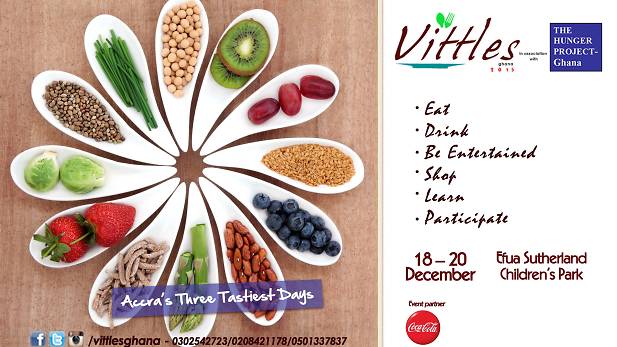 From December 18 – 20, Vittles 2015 partnered with the Hunger Project – Ghana to host a three-day food festival in Accra. The event showcased the best foods from some of the best eateries in the country, as well as helped raise funds for the Hunger Project in what was its debut edition. About 5000 Ghanaians attended the festival and all the proceeds went to the Hunger Project.

According to the organisers of the festival, the aim of Vittles 2015 was also to support the needy who could not afford to have access to food over the festive period. Mr. Samuel Erasmus Adjei, the Country Director of the Hunger Project Ghana, added that the proceeds from the festival would equally be invested in agriculture in rural areas.