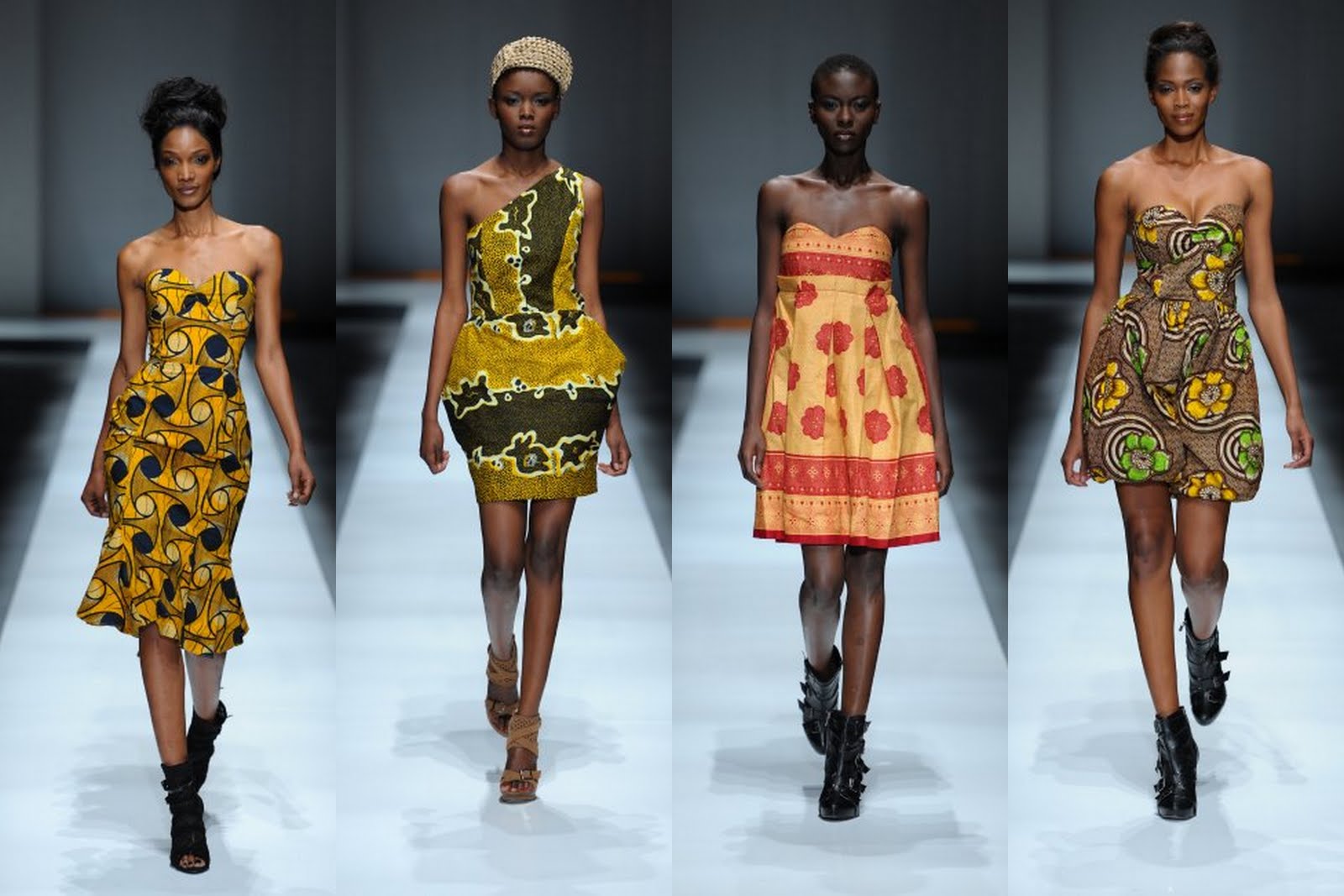 Why The World Should Invest In African Fashion

Africa’s economy has continued growing rapidly riding on the back of success recorded in some sectors and resurgence of others like manufacturing, which has now beamed light on the importance of the continent’s fashion industry and the immense opportunities inherent therein.

Investors are being reminded again at the African Fashion Week New York of the golden opportunity yet to be effectively exploited in the continent’s fashion industry.

The continent has shown eagerness to develop its clothing (apparel manufacturing) capacities for some time now, but efforts have been frustrated by dearth of infrastructure, capital and Asia’s domination of the industry globally. However, with cost of production rising in China, Africa may have been presented a golden opportunity to ‘reclaim’ its fashion industry and invite long-term investments.

Africa is home to seven of the fastest growing economies in the world and about 70 percent of the continent’s population live in countries that have experienced average growth in excess of 4 percent over the past decade. Although the statistics are interesting, African fashion industry currently contributes only a small fraction of what it is capable of contributing to the continent’s GDP, says Deola Sagoe, a Nigerian designer, who has been a force in the industry for the past 25 years.

According to Sagoe, African fashion can become a $15.5 billion industry in the next five years, as personal incomes increase and the continent’s economies grow. The International monetary Fund (IMF) has projected that sub-Saharan Africa would continue its impressive economic growth in 2014, picking up from 4.9 percent in 2013 to about 5 1/2 percent this year. This growth highlights the potentials of the industry, which has been said to be yet to reach its full potentials.

African fashion has enjoyed massive media presence in recent times, which means the world is now aware of the industry and the capabilities of its designers. Several designers from the continent today feature in international fashion shows; 10 African designers are participating at the Africa Fashion Week New York, which joined the prestigious New York Fashion Week last week. Fashionistas around the world and prospective investors alike have had another opportunity to see African creativity first-hand.

The success of some African designers on the international scene has shown the world that given the right investment, African designers can compete on the world stage. Investors sure have been watching the industry for a while and have watched it grow this much; now is the time to invest.

There are 1.2 billion people in Africa, according to UNICEF. The UN agency also estimates the population of the continent to be 2 billion by 2050 and 4 billion by 2100. This large market size presents a great opportunity for investors can leverage on. Fashion brands with the right marketing strategy and the creative acumen have a huge market they can sell to.

Also, about 200 million people in Africa are aged between 15 and 24 (the youth bracket), according to the UN, making Africa the continent with the youngest population in the world. This is expected to continue as 1.8 billion births have been projected by UNICEF, to take place in Africa in the next 35 years. By 2050, UNICEF says the continent will have almost 1 billion children under 18, making up nearly 40 percent of children worldwide. Africa will therefore have the largest labour force in the world in the next 3-4 decades, filled with youths who can sustain the fashion industry. If there is any time to invest in the industry it is now.

“Most millennials tend to be highly educated and technologically savvy,” said Hazel Eki Aggrey Orleans, owner of Eki Orleans, a fashion brand based in London, while stressing the importance of large youth population to the growth of the fashion industry.

“They use social media and text to communicate and stay connected. Through the help of social mediums like Instagram and Facebook, these groups of young people who tend to have hundreds of followers are able to instantly communicate the latest fashion trends worldwide drawing attention to the fashion industry in Africa,” Orleans supplied.

Bethlehem Alemu, owner of Ethiopian brand, Sole Rebels also opined that the continent’s large youth population will foster growth of the fashion industry, as they bring “immense amount of energy and talent” to the industry.

The fashion industry has come of age, but dearth of investments has slowed growth. With its immense potentials, opportunities abound for investors to exploit.

“There are huge opportunities for investments spanning everything from technical know-how to production and on to investment in growing brands and companies,” said Alemu.

She stated that the much needed investments in the industry are fast approaching as several groups of fashion savvy brands and brand holding companies are already noticing the immense growth potential of the industry.

“You will see some exciting investments and acquisitions in that space very soon,” Alemu affirmed.

Kola Kuddus, Creative Director/CEO of Kola Kuddus Couture and Lagos State Co-ordinator for the Fashion Designers Association of Nigeria (FADAN) said Small and Medium Scale Enterprises (SMEs) make up 90 percent of Africa’s fashion industry, most of who are talented and whose growth has been hampered by lack of capital.

The first investors to take Africa’s fashion industry seriously are most likely going to be the biggest gainers of the industry’s growth potentials. There will be little or no competition and hence there will be unprecedented revenue growth in the industry. With governments across the continent beginning to see the need for encouraging the growth of the industry, first real investors are expected to face favourable government policies which will help their investments thrive on the continent.

Retailers who act early and target the emerging middle class in fast-growing countries stand to benefit from long-term gains.

While investors may be ready to invest in the industry, one worry has often been a draw back; it is the dilemma of the kind of products to offer and at what cost. Investors however need not worry anymore as Africa’s economic growth has provided more Africans with more disposable income as the middle class grows.

According to a report by South Africa’s Standard Bank entitled ‘Understanding Africa’s middle class,’ there are 15 million middle-class households in 11 of sub-Saharan Africa’s top economies this year, up from 4.6 million in 2000 and 2.4 million in 1990 – an increase of 230 percent over 14 years.

“With more disposable income and an expectance of quality, we have seen a demand for luxury goods,” said Orleans, who affirmed that investors can get value for their investments in the continent’s growing fashion industry.

“With a growing economy in many large countries within Africa, there has been a move away from basic commodities to a modern lifestyle,” she adds.

She noted that fashion conscious people in many African cities now prefer buying their clothing at home, rather than fly abroad to do their shopping, there fashion brands are expected to continue recording impressive sales.

“It’s an exciting time for investors to invest in African fashion, as there is still so much room for growth,” Orleans advised.

Africa’s creative industry – fashion, film, music and literature, among others – have started wielding notable influence both locally and internationally. This speaks volume of the creativity of Africans, which has led to the growth of the fashion industry thus far.

“Because our industry is a perception industry and it’s a creative enterprise… you need to remain fresh all the time by being creative,” Kuddus said when asked about the place of creativity in the growth of Africa’s fashion industry.

“A designer is encouraged to come up with new design, new concept and new innovation every time this makes the customers more enticed to come and patronize the designer over and over again. So, creativity plays a very major role in the fashion industry,” Kuddus adds.

Also stressing the importance of creativity, Alemu said that “the winners in the fashion industry are always going to be those who can manifest creativity and commercial appeal in the same package.”

Deola Sagoe has dressed international artistes like Rihanna and Solange Knowles; Lisa Folawiyo of Jewel by Lisa has designed for American reality TV star, Angela Simmons and Half of a yellow sun star Thandie Newton, who has also been dressed by Eki Orleans; Nigerian designer Duro Olowu has dressed US first lady, Michelle Obama.

The creativity of African designers has helped their brands carve out a significant sphere of influence globally. Such talents abound on the continent and are ready to showcase their potentials on the world stage.  The growing industry needs a lot of investments as it has all it takes to become globally acclaimed industry.

Clothing exports from sub-Saharan Africa after 2000 signalled the first incidence of large scale manufacturing exports from the region. The growth of this sector has however been slow due to lack of capital in most cases as it is yet to get the expected attention in terms of investments from the private and public sector. The factors that make for a successful industry are however characteristics of Africa’s fashion industry.

Although the industry is still faced with some challenges, the opportunities it presents, outweigh the challenges. The industry is ripe for investments; the continent’s private sector as well as global investors could not have asked for a better time to invest.