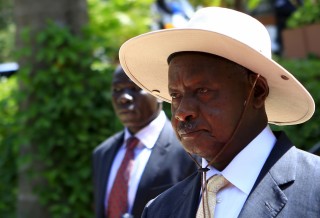 Kizza Besigye, the leading opposition to President Yoweri Museveni in the recently concluded Ugandan presidential elections, is calling the entire process a fraud and a “creeping military coup.” Besigye has thus refused to accept the results which declare that Museveni will be embarking on his fifth term as president of the East African country. A position that he has controversially held for the last 30 years.

Besigye is laying his accusations from his sealed off home, where he has been placed under house arrest. According to him, if Museveni’s win is accepted by the international community, it would be safe to assume that it did not care about human rights or democracy in Africa. Besigye was arrested three times within the election period.

The chaotic election which held last week Friday saw Museveni in the lead with 63 percent of the votes by the time half of the election centres turned in the results from their polls. While the elections appeared to be going smoothly, observers from the international community noted that it was being conducted in an intimidating environment, with calls for Museveni to control the activities of the Ugandan police force which seemed to target Besigye and his supporters of the Forum for Democratic Change (FDC).

Before the elections, Besigye expressed confidence in the fact that he was going to win the election if it was conducted freely and fairly and the reactions of Ugandans on several campaign crowds throughout the country appeared to resonate his confidence. The Human Rights Awareness and Promotion Forum (HRAPF), a Ugandan non-governmental organisation, previously expressed concerns over a flawed election process which is currently being alleged by Besigye. The executive director at HRAPF, Adrian Jjuuko, stated that Ugandan courts have declared two of the country’s elections as rigged. In addition, Jjuuko claims that the outcomes of elections are already decided before it even holds, as “voting day simply rubber-stamps an already made decision”.

Museveni on his part made it clear from the outset that he was not ready to relinquish his seat in the presidency to any other candidate. He emphasised in a radio interview broadcast in Uganda on February 10 that his objective is to unify East Africa under a federation, as he has a mandate to protect Black people, therefore he will remain in office until this is achieved.

Former Nigerian president Olusegun Obasanjo, who serves as the Commonwealth Head of Mission in Uganda criticised the election process. According to Obasanjo, the process was hardly free nor fair as it was characterised by violence and a lack of respect for fundamental human rights which was displayed by Ugandan authorities.