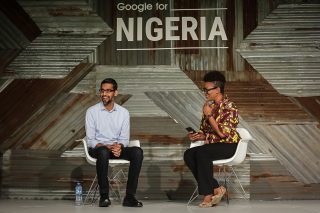 The significance of Google’s investment in Africa’s tech industry

The International Monetary Fund (IMF) estimates that by 2035, Africa’s working age population (15-69) will exceed the rest of the world’s, reaching an estimated 1 billion. With an annual job creation rate of only 3 to 4 million, there is a crucial need to generate more opportunities. To maximise the economic dividends of its rising working-age demographic, Africa needs to shift from a mostly informal jobs sector to a service-based economy centred around technological innovation. This is why Google’s plan to empower Africa is important.

On Thursday, July 27, 2017, Google held a “Google for Nigeria” summit in Lagos to outline its plans to create technology-based opportunities and foster Africa’s and especially, Nigeria’s growing startup culture. The company announced a broad digital skills training programme to help 10 million people in the next five years with building an online presence, improving their CVs, using Google Search to find jobs, etc. It also pledged to train 100,000 people to develop web applications.

In addition, the firm pledged a $2.5 million grant for Nigeria’s Gidi Mobile and South African’s Siyavula, to train 400,000 low-income students in both countries. The CEO, Sundar Pichai, who attended the summit, said: “Nigeria needs digital skills training for its youths and Google is focusing on digital skills training in the whole of Africa, to empower Africans to write software codes for their local economies.”

Google also started a Google Launchpad Accelerator Space programme in Lagos. Launchpad will provide over $3 million in mentorship, funding, work spaces and expert advice to more than 60 African startups in a span of 3 years. It will also run intensive three-months training programs. The tech giant is set to launch in 2018, a Google.org Impact Challenge; inviting non-profit organisations across Africa to compete for a $5 million grant that’ll help with improving people’s lives.

For Nigeria, with a growing population that exceeds 180 million, a demographic explosion poses a great threat. Figures from the National Bureau of Statistics show a steady increase in unemployment from the fourth quarter of 2014 to the fourth quarter of 2016. The job market is currently unable to accommodate the number of working-age people, thus, Google’s skill acquisition programmes and startup grants provide much needed entrepreneurial and job creation opportunities. By focusing on Nigeria, Africa’s most populous country, the company is mitigating, although limitedly, the rising rate of unemployment.

ThisDay reports that Nigeria’s Minister of Communication, Adebayo Shittu, who also attended the summit, said that the federal government will work with Google to maximise the benefits of technology for Nigerians. He added that the government is determined to create policies and collaborate with global technology leaders like Google to ensure that technology is more accessible and useful to businesses, thereby, leading to a wealthier and diversified economy.

However, the government must not only say, it must also do. It must sustain and improve on Google’s efforts by actively diversifying its national revenue sources and exports away from oil and other mineral-based products. Nigeria must also expedite the generation of uninterrupted power, so that skill acquisition programmes such as Google’s can spend less on fuel and generators, and businesses can function in more conducive environments.

Furthermore, the national education budget, which fell from 480 billion naira in 2016 to 448 naira in 2017 and the allocation to tertiary institutions, should be increased to prevent the prevalence of underfunded universities. This will reduce strikes and the consequential rise of out-of-school young adults.

Google’s investment in the Africa’s tech industry will help with skills needed to work in the digital age. However, African governments must work independently and in conjunction with other organisations to mitigate the currently high unemployment rate and prevent a future crisis. The tech giant recognises Africa’s potential and is actively working at maximising it. It is time for African leaders to do the same. Africa must finance its own development if it is to survive its population explosion.