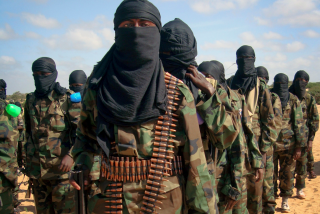 It has been reported that at least 18 civilians died after a bomb exploded in Lafole town, Somalia. According to the police, this blew up a mini-bus that was passing by, killing its passengers. No one has claimed responsibility for the attack yet.

“All the 18 people on board the mini-bus are dead and burnt. A remotely controlled bomb along the road exploded,” said Abidkadir Mohamed, a police officer at the scene.

A source told Reuters that the mini-bus was being escorted by a vehicle carrying troops. A government truck full of soldiers followed by the minibus overtook him at high speed before he heard a loud explosion, he said. “The government car which was probably the target escaped undamaged.”

Al-Shabaab, the terrorist group infamous for wreaking havoc in the east of Africa, has attacked African Union security forces, aid workers and government officials in the Somalian capital of Mogadishu, several times.

In September last year, the African Union peacekeeping force, AMISOM, withdrew from Buqda, barely a month after taking control of the town from al-Shabaab. Although the militant group claimed that it had taken full control of the base, AMISOM rejected the claim.

The AMISOM forces consistently face attacks from the militant group. In June 2015, the group rammed a car into its Leego base and killed 35 soldiers. The group vowed to step up attacks in Mogadishu, the country’s capital and also continue to target AMISOM as long as their forces remained in Somalia.

On April 20, 2015, al-Shabaab attackers killed six people, among them four aid workers for the international children’s agency UNICEF, in Somalia’s northeastern city of Garowe. The attack came only a day after the militants killed three AU peacekeepers, a week after the group killed 17 Mogadishu, and barely a month after it murdered 148 students in Kenya. There have been more than 1,700 terrorist attacks and the death of over 4,000 people in Somalia, Kenya and Uganda due to the activities of al-Shabaab terrorists.

With Boko Haram destabilizing parts of West and Central Africa, and ISIS joining Al-Qaeda in the Islamic Maghreb (AQIM) to attack North Africa, African countries must begin to join forces in order to combat terrorism which is presently the continent’s existential threat.